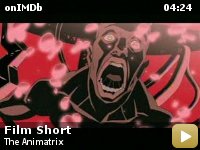 The Animatrix is a collection of several animated short films, detailing the backstory of the "Matrix" universe, and the original war between man and machines which led to the creation of the Matrix.

Storyline
Anthology of nine short anime (Japanese animation) films tied in to the 1999 blockbuster "The Matrix" and its sequels. "Final Flight of the Osiris": The crew of the hovercraft Osiris attempt to warn their city of an imminent attack. "The Second Renaissance, Parts 1 & 2": The story behind the war between man and the machines, how mankind scorched the sky, and the creation of the Matrix. "Kid's Story": A teenager is contacted by Neo, and manages to escape the Matrix. "Program": Two warriors battle in a samurai training simulation when one decides to betray his crewmates and re-enter the Matrix. "World Record": A champion sprinter manages to break free of the Matrix by sheer physical effort during a record attempt. "Beyond": A young girl searching for her cat discovers a haunted house caused by a glitch in the system…

Jue (segment "Final Flight of the Osiris")
/
Manabu (segment "Beyond")

WILHELM SCREAM: in the episode, "Matriculated". It happens when the Sentinels attack the humans in the lab near the end.

Continuity:
When Washington D.C. is shown the first time in "the second renaissance", you see that directly behind the capitol, there are enormous skyscrapers, but the second time they show the capitol (in the riot scene), you can see the sky behind it.

Machine:
Hand over your flesh, and a new world awaits you. We demand it.

The idea of the Matrix is so full of potential and could be taken in so
many, many directions. The movies decided to go in the direction of
pretension but the Animatrix goes EVERYWHERE the movies don't. It is so
far
superior and well worth the time. It's a shame that most audiences don't
consider Anime or any form of animation to be 'real' or something that
they
should take seriously (sadly even Matrix fans feel this way and won't
watch
it simply because it's animation) because they're missing out on something
very special here.


It's not original to review this DVD by going thru all the shorts so I'll
just stick to what I like best (which is most of it). First of all, 'The
Second Renaissance Parts 1 and 2' is absolutely VITAL as backstory to the
first Matrix film. And it's a zillion times more interesting than the
sequels in terms of drama, irony and subtext. 'The Final Flight of the
Osiris' takes place before Reloaded and leads us into story of the
machines
beginning to drill down to Zion. And it's very cool. 'Detective' is a
story
of a private eye trying to find Trinity and discover what exactly the
Matrix
is. But Agent Smith comes after him to put a stop to that. It's in black
and
white and has a wonderful atmosphere of 1950's dime novel pulp fiction.
'Matriculated' is the story of a captured machine who is taught/hypnotized
into feeling what it's like to be human. It's a very clever story that
manages to provoke feeling for the characters (and even the captured
machine), something the movies never did.
'Kid' is about the kid from Revolutions who takes over the Mech at the end
and manages to open the doors to Zion. Apparently, before being freed, he
was a schoolkid who met Neo online and wanted to 'wake
up'.

But the best one is 'Beyond'. A magical tale with an atmosphere so solid
that it's almost tangible. It's about a girl who goes looking for her cat
in
an old abandoned factory with some other kids. But in this factory the
Matrix is having problems and 'reality' for the characters doesn't quite
work properly. It's a very interesting tale that really makes you
think.

There are numerous extras on this DVD, all of them more interesting that
the
other Matrix DVDs. All 9 of the shorts are presented in 2.35:1 anamorphic
widescreen with Dolby 5.1 sound. It's truly for all fans and non-fans of
the
Matrix universe.