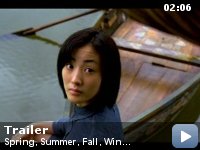 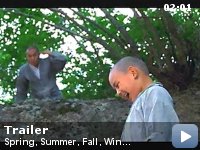 This film takes place in an isolated lake, where an old monk lives on a small floating temple. The wise master has also a young boy with him that teaches to become a monk. And we watch as seasons and years pass by.

Storyline
In the midst of the Korean wilderness, a Buddhist master patiently raises a young boy to grow up in wisdom and compassion, through experience and endless exercises. Once the pupil discovers his sexual lust, he seems lost to contemplative life and follows his first love, but soon fails to adapt to the modern world, gets in jail for a crime of passion and returns to the master in search of spiritual redemption and reconciliation with karma, at a high price of physical catharsis…

The inscription on the floor is "The Heart Sutra", one of the most important Sutra of Mahayana Buddhism, written in literary Chinese.

Continuity:
When the young monk finishes inscribing the Heart Sutra on the floor and falls down exhausted, the inscriptions below him change between shots (even though he is lying motionless). In one shot, the inscriptions he is lying on have been painted; and as he wakes up, the paint is gone.

I was left speechless by this movie


This film left me speechless, and I still have a hard time putting how
I feel about this movie into words. After seeing it the first time in
the theater, my friend and I couldn't bring ourselves to say a word to
each other…not even in the car on the ride back. The second time I
saw it, after purchasing it, another friend and I walked around the
campus for half an hour in silence. The third time, a friend and I sat
in silence in her room for an hour after the movie was over. This film
is that profound, touching, and moving.


Spring, Summer, Fall, Winter…Spring is the most beautiful movie I
have ever seen. Visually it is fantastic, though several films surpass
it in this aspect. However, the film manages to speak directly to the
soul (or…failing to believe in the soul…something deep inside
anyone watching it), and this is where it's beauty lies. Parts are so
affecting that a painful nostalgia for a place you never knew
overwhelms you.

I am sorry I cannot be more helpful…the quality that makes this movie
so wonderful is well beyond words for me.