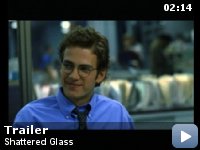 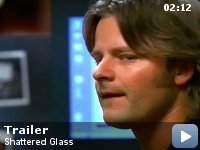 The true story of a young journalist who fell from grace when it was found he had fabricated over half of his articles.

Storyline
This film tells the true story of fraudulent Washington, D.C. journalist Stephen Glass (Christensen), who rose to meteoric heights as a young writer in his 20s, becoming a staff writer at "The New Republic" for three years (1995-1998), where 27 of his 41 published stories were either partially or completely made up. Looking for a short cut to fame, Glass concocted sources, quotes and even entire stories, but his deception did not go unnoticed forever, and eventually, his world came crumbling down…

According to Charles Lane, the scene in which Lane confronts Glass in front of TNR magazine covers was virtually verbatim retelling of the actual events.

Revealing mistakes:
When Caitlyn types her email about Stephen's suspension, she adds a "sad face" made from a colon and an open parenthesis at the end of the message which appears on the screen. When we see the email again, the "sad face" has disappeared.

Stephen Glass:
It's in my notes.


One of the unsung and unheralded movie treasures of 2003, 'Shattered
Glass' tells the fascinating story of Stephen Glass, one of the top
reporters for The New Republic in the 1990's, who rocked the media
world when he had to finally confess that he had fabricated many of his
stories. 'Shattered Glass' plays like a modern Greek tragedy, centered
on a man of great talent and potential brought down by his own internal
weaknesses. Glass was only 24 when he fell from grace; prior to that,
he was a hot shot reporter who, in the highly competitive world of high
stakes journalism, kept looking for that little added edge to make his
stories saleable. For a number of years, Glass managed to slip those
stories past his editors and fact-checkers without being discovered.
However, in the spring of 1998, his world came crashing down around him
after an internet magazine became suspicious of a story he had written
about a computer hacker who, it turns out, never actually existed.


'Shattered Glass,' which is based on an article by Buzz Bissinger,
succeeds as both a complex character study and a top notch thriller.
The film never gives us any easy answers as to just why Glass put his
journalistic integrity and career on the line by perpetrating these
frauds. As portrayed in the film, Glass is a paradoxical mixture of
both arrogance and insecurity, a smooth manipulator who can charm and
sweet talk his way into getting people to like and trust him while at
the same time employing those same skills to get himself out of tough
situations. Eventually, however, the act runs out of steam and he is
exposed for who and what he really is. Yet, who, indeed, is he? Is
Glass simply a pathological liar? Is he a stressed-out, overworked
'kid' trying desperately to keep his head above water in the cutthroat
world of professional journalism? Is he merely a smooth-talking,
unethical charmer who knows what he wants and will stop at nothing to
get it? Could it be that he is some or all of these things at the same
time? The fact that the film never fully answers these questions is
what pulls us so deeply into the drama. Moreover, Hayden Christensen
gives a superb performance as Glass, making the character both smarmy
and vulnerable, repellant and sympathetic all at the same time. In
addition to Christensen, the film is filled with brilliant, subtle
performances by Peter Sarsgaard, Chloe Sevigny, Hank Azaria and many
others.

Superbly written and directed by Billy Ray, 'Shattered Glass' is one of
the most suspenseful films of recent times, far more gripping than most
so-called thrillers because the film is dealing with real-world issues
of integrity and ethics. We watch with morbid fascination the slow
unraveling of a man's 'crime' and character, as Glass becomes more and
more ensnared in a web of his own making. The step-by-step process by
which a promising young man's true nature is uncovered, then his
reputation destroyed, becomes the stuff of classic tragedy.

Although The New Republic eventually recovered from this debacle, the
filmmakers do not let the magazine off the hook quite so easily. The
thing we are most struck by is how incredibly young the reporters at
the magazine were at the time (we are told their average age was 26!).
How such unseasoned writers came to play so prominent a part in so
major and venerable a publication is indeed one of the great mysteries
of the story – and one of the sharpest indictments leveled against the
magazine by the makers of the film.

'Shattered Glass' is an ineffably sad film, one that makes us mourn the
loss of a promising, talented individual who sowed the seeds of his own
destruction (he is currently a lawyer). Yet it also inspires and
uplifts us by reminding us that men of integrity will almost always
triumph over men of little or no integrity in the long run. That's a
truism worth remembering in this time of great moral confusion in which
we find ourselves living. 'Shattered Glass' is not to be missed.