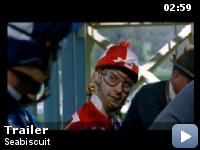 True story of the undersized Depression-era racehorse whose victories lifted not only the spirits of the team behind it but also those of their nation.

Storyline
It's the Depression, and everyone needs to hold onto a dream to get them through the bad times. Car maker Charles Howard is no different, he who is trying to rebuild his life after the tragic death of his only child and the resulting end of his first marriage. With second wife Marcela at his side, Charles wants to get into horse racing and ends up with a team of underdogs who are also chasing their own dream. The first is trainer Tom Smith, who has a natural instinct to spot the capabilities of horses. The second is the horse Tom chooses for Charles,

Ex-racing driver Allen Padelford specially designed the MTV insert cars – a Mobile Technocrane Vehicle to allow filmmakers to shoot insert shots for horse race sequences. It run up to 45 mph and weighs at 28 thousand pounds. The car can fit a 30ft Technocrane dolly at the back and Wescam XR head at front. Another one was designed specifically two fit in two animatronic horses.

Audio/visual unsynchronized:
While Red is exercising a horse for his former boss, the "hand start" John Deere tractor makes a sound like an electric starter.

Narrator:
[First lines]
They called it the car for every man. Henry Ford himself called it a car for the great multitude. It was functional, and simple, like your sewing machine, or your cast-iron stove. You could learn to drive it in less than a day. And you could get any color you wanted…

Roger Ebert says he has a theory that `people more readily cry at movies
not
because of sadness, but because of goodness and courage.'

This is certainly a reason why Gary Ross's Seabiscuit tugs so effectively
at
the heartstrings. But the main one is the way the movie shows the triumph
of
the underdog spread fourfold among three men and a horse. And again the
timing is right in the American release. Just as Danny Boyle's 28 Days
Later
was delightful because it was a low budget movie that could compete with
a
lot of loud and dubious blockbusters, Seabiscuit earns our gratitude by
being a blockbuster without explosions or exhibitionism, an epic of
restraint, modesty and — yes — `goodness and courage.' The loudest
sound
you hear is the starting bell for the races. There are those of us,
mainstream folk, who've been starving for such fare. I saw people in the
audience in the early matinee who plainly were alive in 1929 and 1938,
and
they wept and applauded throughout with awe and gratitude. We shall see
how
the younger generations respond.

An enthusiastic response is justified. There is nothing in Seabiscuit
that's
very original; it awakens involuntary flashbacks to many traditional
Rocky-esque sports biopics as one watches. But Gray and his chief
collaborators, the talented author Lauren Hillenbrand and the splendid
cast
headed by Jeff Bridges, Chris Cooper, and co-producer Tobey McGuire, have
nonetheless provided us with a quite wonderful movie, as much for its
surefire writing and brilliant editing as for any of the acting.

Everyone must agree that the three men behind the most famous horse of
his
time are played by three of the best actors Hollywood now has to offer.
Critics are in accord in saying Cooper's performance is the subtlest and
the
most real: he models the principle that Less is More. Tobey McGuire isn't
given quite enough to do; his greatest accomplishment may be his lean
look;
he's barely recognizable, and as a former redhead myself I don't think
the
dye job is as bad as some have claimed. Bridges is, in his way,
magnificent,
but glossily iconic and therefore somewhat opaque. His resemblance to
Franklin D. Roosevelt is pushed a bit too hard, as is the whole uplifting
populist message – the `we didn't fix the horse. He fixed us – and we
fixed
each other,' and `sometimes all somebody needs is a second chance,'
stuff.
(It's pretty corny. But within the context of this beautifully made movie
that believes in itself, we buy it.)

It's important, anyway – if young people do come to see Seabiscuit – for
them to get the simplified, but nonetheless just portrait of the times
provided with authentic stills and footage, and the voiceover narration
by
iconic historian David ("The Civil War") McCullough. The travelogue of
the
Depression and Prohibition years includes a quiet but heartfelt plug for
FDR
and that, too, is moving, especially in today's post-Yuppie mood of
numbingly exploitive jingoism.

Indeed each of the three actors gives a powerfully understated
performance –
they're like thoroughbreds who're never given their head – whose litotes
(a
word schoolboys learned back then) enhances the movie's epic quality by
never letting us forget that their triumphs were snatched from
deprivation
and adversity.

The long time devoted to the three men's backgrounds early in the movie
isn't ill spent. It establishes the leisurely pace that is the essence of
epic. But these back-stories aren't as necessary as the filmmakers may
have
thought. And despite the slow movement, there isn't deep detail. There's
barely one scene to establish Red Pollard's (McGuire's) literate,
close-knit
family before he's cast (heartbreakingly) out of it. Charles Howard's
(Bridge's) loss of his son is too telegraphic, though it's a fine touch
to
show him wailing with the boy's body but with his voice barely audible:
it's
one more example of the movie's sense of the period and of its restraint.

Right from the first the horse races are astonishing in the camera's
closeness and vividness, the way we feel the danger and physicality of
the
jockeys' brutal competition with one another. Since we know Pollard is a
failed prizefighter and general scrapper, we take in stride that fact
that
he's physically fighting with other jockeys during the early races. This
is
a movie about horse racing and the races had better be terrific, and they
are. It's when we see the power of those sequences that we realize
Seabiscuit has the makings of a popular classic.

Jeff Bridges' performance in particular seems etched in stone. There are
touches of Jimmy Stewart, Joseph Cotton, even Orson Welles in his role
and
his looks. The chameleon Bridges comes carrying traces of Coppola's
Tucker,
but he has entered into the period and the tradition with utter
conviction.
Cooper's austere minimalism, because it is the essential spirit of the
movie, its understatement (litotes), is the central performance. He is a
man
who communicates better with horses than with men. McGuire's performance
is
the noisiest, but he too reflects the social restraints of the period,
and
his wings are clipped before the final triumph can take place. This was a
time when people had superiors and recognized it by calling them Sir and
Mister. Everyone male wore a suit and tie, even jockeys off duty.

Seabiscuit's ability to tug at the heartstrings first appears when Red
Pollard is let go by his destitute father so he can be a jockey. The
moment
is deeply sad because what seems an act of heroic renunciation by a
loving
parent is in fact abandonment, and it feeds the young man's rage
thenceforth. And it's more complex than that because it grows out of the
enormous pressures of the Depression, a time when millions in America
wandered westward deprived of everything but their cars and a few
possessions.

Not only Bridges' performance but whole sequences of Seabiscuit seem
etched
in stone and contain examples of textbook-perfect editing that possesses
sweep and complexity and advances the story while keeping our focus on
the
prevailing mood.

This is, of course, the classic American story of triumph out of defeat
and
resolution out of conflict. As is a little too clearly pointed out, all
three men, Charles Howard, Tom Smith, and Red Pollard, have had great
devastation and loss in their lives (echoed by the whole country's
economic
devastation, failure, and loss of nerve; and it's implied — with some
failure of restraint — that Seabiscuit's underdog triumphs were as
needed
as the New Deal). Their horse was rescued by Smith (Chris Cooper) when it
was going to be shot because it seemed unruly and untrainable. Out of all
this failure and tragedy the men forge their victories: Seabiscuit, the
horse that lacked breeding, was untrainable, and was `too small';
Pollard,
abandoned by his parents, beaten in many prize fights, secretly blind in
one
eye and `too big' to be a top jockey; Smith, a gifted horse tamer and
trainer reduced to riding the rails and hoboing; Bridges, the self-made
millionaire devastated by the destruction of all his hopes in a ruined
economy and the sudden death of his young only son. They bond together to
make Seabiscuit into one of the greatest racehorses in history. Who
wouldn't
be moved by this? Only the conventional fat man who's War Admiral's
snobbish
Maryland owner. It's all about heart, and Seabiscuit's got it.

William H. Macy's caricatured portrait of an alcoholic radio announcer is
a
highlight, in the sense of a bright spot on a painting. It's a shrill and
brittle performace that we tolerate because of the moments of relief
Macy's
little comic vignettes provide. Subtlety is sacrificed to provide an
effect,
and to brush in a bit of humor amid all the earnestness. One only wishes
there were more of a progression; that the character didn't sip from the
same bottle in every scene but got drunker, or soberer, as things went
along.

We have to allow for the exigencies of filmmaking that required ten
horses
to be used for Seabiscuit, leading to the irony that this unique horse is
a
composite.

If you accept its conventionality, Seabiscuit is not just a good movie
but a
great one.