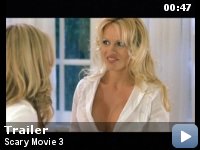 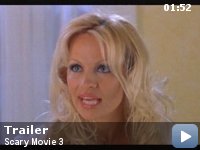 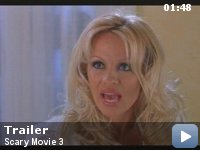 In the third installment of the Scary Movie franchise, Cindy has to investigate mysterious crop circles and video tapes, and help the President in preventing an alien invasion.

Storyline
A mysterious killer video tape is circulating around. One look at this tape and you have seven days left to live. News Reporter Cindy Campbell (Faris) witnesses this video tape and tries to work out a way to prevent her death. But this is not the only mystery to appear. Crop circles have been appearing in the local farm of Tom (Sheen) and George (Rex). With help from Aunt Shaneequa (Latifah), Cindy suspects that the aliens may be linked with the killer tape and must now work out both mysteries before it's the end of the world.

A lengthy alternative ending was shot but later scrapped. That ending included spoofs of
A Beautiful Mind,
Hulk, and especially
The Matrix Reloaded.

Continuity:
When Cindy is on the phone to the man who wants to speak to Cody, she begins writing the message for him at the top of pad. When she picks it up to look at it, the writing is in the center of the pad.

President Harris:
These men died for their country. Send flowers to their bitches and hos.


Scary Movie 3 is largely a spoof of five films, The Ring (2002), Signs
(2002), 8 Mile (2002) and to a lesser extent, The Matrix (1999) and The
Matrix Reloaded (2003). It begins with a spoof of the first scene from
The Ring, then cuts to Tom's (Charlie Sheen) discovery of the crop
circles on his farm ala Signs. As a bridge between the stories, Cindy
Campbell (Anna Farris) is a television news reporter who is doing a
story on the crop circles, and who is the guardian of a young psychic
boy, Cody (Drew Mikuska), similar to Aidan of The Ring. The two stories
turn out to be intimately connected. Tom's brother, George (Simon Rex)
is a white rapper, ala Eminem in 8 Mile, and he strikes up a romance
with Campbell. Meanwhile, President Harris (Leslie Nielsen) also
becomes involved as the security of the country is threatened.


I used to make it a point to not read any other reviews before I wrote
my own, but recently, I've become curious when I watch a film I really
enjoy, like Scary Movie 3, that many other people seemed to dislike. I
find it informative to read the negative reviews to try to figure out
why people dislike the film.

The negative reviews for Scary Movie 3 weren't very helpful. The most
popular complaints seem to be that the trailer ruined the film by
"giving away the good parts" and that the film has fun at the expense
of some people's sacred cows. Additionally, many people made a comment
to the effect that you'd only enjoy the film if you're, say, 13 or
under.

I never watch trailers before I see a film any longer. I have also had
trailers ruin many films for me in the past, so I just stopped watching
them; I recommend that you do the same. If you don't know already,
think about commonalities in the films you tend to like. Get an idea
for the genres, directors, actors and so on that you usually enjoy.
That's the only guide you really need to determine if you should see a
film. It's not a guarantee, but what is? I actually look away when
trailers appear on screen before the feature when I'm watching a film
in the theater, and I try to mentally block out the sound. It's pretty
easy to do, as trailers tend to be heavier on sound effects than
dialogue. If trailers appear on television, I quickly change the
channel. At any rate, it doesn't make the film you're considering any
worse just because you watched a trailer first. Scary Movie 3 isn't bad
because the trailer ruined it for you.

Next, it's not a good idea to watch these kinds of comedies (we might
call them "absurdist comedies", or "outrageous comedies") if you have
any sacred cows–that is, anything that you feel one should not joke
about, or that one could go too far in joking about. I don't see it as
the film's fault if you haven't analyzed yourself and/or if you do not
research the kinds of films you're considering viewing so that you
don't expose yourself to something that you're going to consider
offensive. If you're sensitive about certain things then you need to
learn how to avoid them. If you're allergic to nuts or shellfish,
you're going to be careful to not eat anything containing nuts or
shellfish, right? It's not the chef's fault.

Finally, I'm definitely older than 13–I'm in my late 30s, and I loved
Scary Movie 3. I came very close to giving it a 10 out of 10–it was at
that score until the climax, which I felt unfortunately lost a bit of
the comic momentum that preceded it, and which arrived a bit too soon
for my tastes (I prefer longer films).

It helps to be familiar with the films being spoofed. Believe it or not
a lot of the jokes are fairly subtle jabs at elements of the source
material–for example, the pillow fight of the opening scene, which has
connections to the almost lesbian subtext of the same scene in the
original Japanese version of The Ring, Ringu (1998); or the character
and camera "spins" when Tom first exits his farmhouse, which pokes fun
at the stylistic cinematography of Signs. There are also many quicker
references to other films. These will have far less payoff if you're
not familiar with the source material. For example, during the climax
of Scary Movie 3, there's not only a reference to the Texas Chainsaw
Massacre (1974), but also the climax of Motel Hell (1980), which
features an infamous chainsaw "duel".

There is a stylistic difference between the first two Scary Movies and
this one, which is undoubtedly correlated to the change in directors.
Rather than the Wayans Brothers, David Zucker directs here. Zucker is
the exclamatory wiz who also helmed Airplane! (1980), Top Secret!
(1984), and The Naked Gun: From the Files of Police Squad! (1988).
Scary Movie 3 is much more in the vein of Zucker's previous work than
the other Scary Movies. I can't imagine why someone would like the one
style and not the other, but if so, that might help you decide which
Scary Movies to see, if any.

Finally, there were also some complaints over the plot of this film,
especially the combination of such seemingly disparate plots from the
source material. It's important to remember that this is absurdist
comedy, with an emphasis on absurd. The crazy segues from one plot to
the other, with them meeting in the middle thanks to Cindy, President
Harris and a number of other crazy devices, was beautifully ridiculous.
I want ridiculous when I watch a film like this. That's largely what
attracts me to the genre. If you're at all a fan of absurdism, you
should find much to enjoy here.