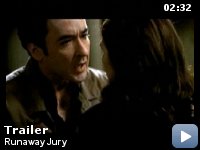 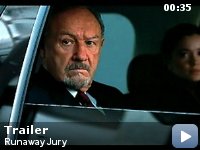 A juror on the inside and a woman on the outside manipulate a court trial involving a major gun manufacturer.

Storyline
Wendell Rohr is a torts lawyer taking on the gun lobby. Rankin Fitch is the jury consultant for the Defendants and between them the battle is for the hearts and minds of the jury. But there is someone on the inside. Nicholas Easter is a juror with a girlfriend, Marlee, on the outside. they have a past ….. and their own agenda.

Taglines:
Trials are too important to be decided by juries.

At the beginning of the movie when John Cusack's character sees the maintenance man, the man is smoking a cigarette. Cusack tells him he should quit smoking. This pays tribute to the book, which was based around cigarette companies instead of gun makers.

Continuity:
In the first scene when the defense and plaintiff first walk into the courtroom, the defense sets the rigged briefcase on the table as he walks to the table. In the very next shot they show a close-up of him setting the briefcase in place from a sitting position.

Well acted yet flimsy adaptation of the John Grisham novel lacks a well
rounded script to carry itself but has an amazing cast that lifts this
mediocre film past its problems and into respectability. The script has
way too many loop holes in logic to even take what you are seeing
seriously and the directing lacks a sharp narrative to get across what
it's trying to say. The acting is the only major thing that this film
excels on and with out it, this would have been a cable movie of the
week at best. Gene Hackman is great as a jury consultant who would stop
at nothing to win a case and Rachel Weisz is amazing as his adversary
in and out of the courtroom. Dustin Hoffman is great as well but he is
not in the movie as much as advertise and John Cusack is decent for the
role he has. The biggest fault the movie does have is the fact that
certain plot points disappear during the course of the film as well as
characters. It's a great way to spend two hours of your time,
especially with the great performances of Gene Hackman and Rachel Weisz
to keep you glued to what is happening but the movie has a lot of
glaring problems that makes it hard to sit though in certain parts.