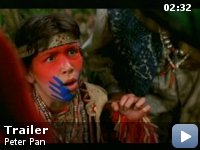 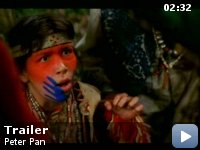 The Darling family children receive a visit from Peter Pan, who takes them to Never Never Land where an ongoing war with the evil Pirate Captain Hook is taking place.

Storyline
In stifling Edwardian London, Wendy Darling mesmerizes her brothers every night with bedtime tales of swordplay, swashbuckling and the fearsome Captain Hook. But the children become the heroes of an even greater story, when Peter Pan flies into their nursery one night and leads them over moonlit rooftops through a galaxy of stars and to the lush jungles of Neverland. Wendy and her brothers join Peter and the Lost Boys in an exhilarating life–free of grown-up rules–while also facing the inevitable showdown with Hook and his bloodthirsty pirates.

Taglines:
All children grow up except one.

Jeremy Sumpter went from 5 feet tall to 5' 8" during filming. The window of the nursery had to be rebuilt 4 times because the actor kept hitting his head on it.

The best Peter Pan to date, unfortunately at the wrong time.

Up front I will say it: this is the best Peter Pan adaptation yet, and
in what follows I will tell you why. Despite the film's quality, it
failed at the box office, and for good reason. Insight into that shall
be revealed as well. Such sage wisdom ye shall not find in other
reviews. Read on.

The main thing that sets this adaptation apart from previous attempts
is sexual tension. Yes, sexual tension. If you've read other reviews,
no doubt it has been mentioned. Many people seem to take offense at
said tension. Such people seem to forget what it was like to be in the
age bracket of 12 – 14. The makers of this film don't dance around the
fact that Wendy has just met the boy of her dreams, and he is ready to
whisk her off to fantasy land. Much is made of the fact that they meet
in the bedroom and play father and mother to the lost boys. The
relationship of these two pre-teens is as complex as any two adults in
any other movies. And the young actors handle the relationship with
grace and authenticity.

The production itself is beautiful, albeit stylized. The filmmakers do
not mask that neverland is a fantasy world, and it stays that from
beginning to end. Every frame in this movie is beautiful. There are
some moments that are literally breathtaking.

Ultimately what makes this film excellent is that it tells a story. And
this story is centered on Wendy, and the boy of her dreams: Peter Pan.
Except he cannot be the man of her dreams, and that is truly tragic.
Captain Hook is the opposite: a man who cannot be young. A man who is
"old, alone, and done-for" according to Pan. We end up exploring
Wendy's psyche throughout the film, and it is almost perfectly
achieved.

But why did this film fail at the box office? Competetion. Who can
possibly defeat Lord of the Rings or Harry Potter, two bigger and much
more commercial adaptations of fantasy books? This film deserves to be
a classic and is one of the best fantasy movies to date. All should see
it, young and old. It is rich, beautiful, and exciting.