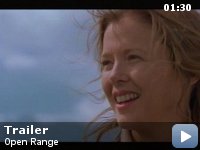 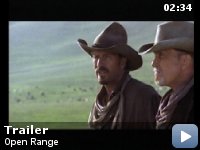 A former gunslinger is forced to take up arms again when he and his cattle crew are threatened by a corrupt lawman.

Storyline
Boss Spearman, Charley Waite, Mose Harrison and Button freegraze their cattle across the vast prairies of the West, sharing a friendship forged by a steadfast code of honor and living a life unencumbered by civilization. When their wayward herd forces them near the small town of Harmonville, the cowboys encounter a corrupt sheriff and kingpin rancher who govern the territory through fear, tyranny and violence. Boss and Charley find themselves inextricably drawn towards an inevitable showdown, as they are forced to defend the freedom and values of a lifestyle that is all too quickly vanishing. Amidst the turmoil, life suddenly takes an unexpected turn for the loner Charley when he meets the beautiful and warm spirited Sue Barlow, a woman who embraces both his heart and his soul.

Taglines:
No place to run. No reason to hide.

The rifle that Charley uses in the shootout is an 1873 Winchester sporting rifle.

Boss Spearman:
[indicating a thunderstorm]
Think she'll get over this-a-way?

4 Reasons Why I Love This Film


They don't westerns that much anymore, at least on the big screen.
People in the Baby Boomer generation grew up with them on television.
Western films were big at the box office in several decades, too.

Well, at least Kevin Costner must have a heart for the genre as he been
involved with several major western productions in the last 15 years,
this the latest.

The best thing I can say about this film right out front is that it may
be the best western I've ever watched. I can't give it higher praise
than that! Since I've seen so many, for so long, it's especially high
praise.

I make this bold statement because of the following:

1 – Fantastic scenery and beautiful cinematography. If it looks
spectacular on my 24-inch flat-screen, I can't imagine how awesome it
would be a big plasma set.

2 – Characters you really care about, led by three actors who almost
always give solid performances: Robert Duvall (the best in here),
Costner and Annette Bening. Duvall, by the way, gives one of the best
short "speeches" I've ever witnessed in a movie. It was nice to see
Bening actually play a wholesome woman for a change. The two men who
are out on the range with Duvall and Costner also were excellent.

3 – Just the right amount of action. When the action does occur, such
as gunfire, the sound is incredible. This might be one of the best
movies, audibly-speaking, I've ever heard, which is another reason for
ranking it Number One. There are no lulls but not a ton of action,
either.

4 – Just the right amount of romance. It doesn't get sappy, it doesn't
overshadow the basic story, but it adds a nice, soft touch to what
could be a very rough and unpleasant tale. And, in a different twist,
it's the romance, not the usual climactic gun battle, that ends this
film.

I can't say enough about this movie except that I'm sorry more westerns
like it aren't made today.