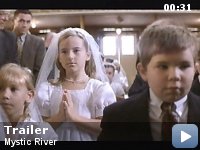 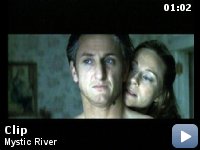 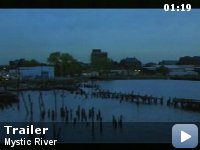 With a childhood tragedy that overshadowed their lives, three men are reunited by circumstance when one loses a daughter.

Taglines:
We bury our sins, we wash them clean.

Crew or equipment visible:
When the two "cops" take the kid away at the beginning of the movie, you can see the camera lens and the hand of the operator as the are about to pull away.

Radio Announcer #1:
…before the end of the season last year, and then re-injured it in spring training on a terrific game-saving play. You know, I was talking with…

Sean's Father:
What time is this going on?

Sean's Father:
Goddamn Cuban, man. He can hurl it.

Jimmy's Father:
I'd hate to be facing him.


Lovers of great acting had best not pass up 'Mystic River,' Clint
Eastwood's powerful, award-laden adaptation of Dennis Lehane's
best-selling novel. Sean Penn, Tim Robbins and Kevin Bacon play three
working class Bostonians forever bound together by a mutual childhood
tragedy that has since gone on to define the kind of people they've
become and the kind of lives they've led. The film begins with a brief
prologue as we see the three youngsters – Jimmy, Sean and Dave – out
playing in the street one day, when they are confronted by a pedophile
who, posing as a policeman, tricks one of them, Dave, into getting into
the car with him and another man. Fast forward to the present as we
pick up the trio as grown men who have, for all intents and purposes,
gone their separate ways. Penn is Jimmy Markum, a former petty thief
who spent two years in the slammer but who has since turned straight
and now owns a neighborhood liquor store. When Jimmy's daughter from
his first marriage turns up murdered, the three men's lives intersect
in ways they could never have imagined. Bacon is Sean Divine, a
homicide detective assigned to the case, and Robbins is Dave Boyle, a
sporadically employed man who may be a prime suspect in the murder.
Dave still lives with the trauma of that earlier soul-shattering
experience, while Jimmy and Sean wrestle with why they managed to
escape the cruel finger of fate that pointed so grimly at their hapless
playmate. The film is about how the events of our early lives (and, in
the case of Jimmy, it doesn't stop at this one incident) can end up
coming back to haunt us later down the road.


The Brian Helgeland screenplay makes the pain that each of these men
experiences vivid and palpable. The grief Jimmy feels over the loss of
his beloved child, the psychological torment Dave suffers as a result
of his abuse, and the bewilderment and loneliness Sean experiences from
a failed marriage all become integral to this dark tale of bitterness,
revenge and attempted healing. At times, we do find ourselves wishing
that the script would concentrate less on the details of the murder
investigation and more on the inner workings of the three main
characters. Too often we feel as if we are only scratching the surface
of the roiling psychological torment taking place deep in the bowels of
these men. The plotting, particularly towards the end, often feels more
contrived than it needs to be, with heavy-handed ironies and obtruding
parallelisms that don't seem to know when to leave well enough alone.
Laura Linney, as Jimmy's second wife, has a key Lady Macbeth moment
late in the film that might have been effective had we been more fully
prepared for it and had her character been more thoroughly developed
throughout the course of the film. As it is, the scene seems to come
out of nowhere and leaves us both bewildered and hanging.

Still, these are minor quibbles when it comes to a movie as finely
acted and directed as this one is. Penn hits all the right notes as a
man facing the worst experience life could possibly throw at a person –
the murder of one's child – trying to make sense of a tragedy that
defies any rational explanation. Robbins beautifully underplays the
role of a man scarred forever by what happened to him in his youth, now
endeavoring to function as an adult when he was robbed of any semblance
of a childhood. Bacon is excellent as the man who attempts to put all
the pieces together, not only of the case but of the shattered lives he
and his two buddies have been living all these years, and Marcia Gay
Harden is outstanding as Dave's loving wife who struggles with what is
perhaps the greatest moral dilemma faced by any character in the movie.
Linney, Lawrence Fishburne and Tom Guiry offer fine supporting
performances.

As director, Eastwood allows his superb cast ample time to develop
their characters, never hurrying the proceedings along and always
allowing the conversations to play themselves out. He recognizes the
quality of the material and feels no need to gussy it up with
self-conscious camera angles or fancy editing. He also uses the bleak
settings of blue collar Boston as an effective backdrop to the stark,
chilly tale he is telling.

Perhaps it is just an odd coincidence that three of the very best
movies of 2003 – '21 Grams,' 'The House of Sand and Fog' and 'Mystic
River' – all suffer from the same tendency on the part of the
filmmakers to move away from reality and towards melodrama and
contrivance in the final act. Of the three, '21 Grams' and 'The House
of Sand and Fog' are harmed less by this than 'Mystic River' because
they have a somewhat deeper thematic base and richer character
development than does the Eastwood film. Still, 'Mystic River' is a
mighty impressive achievement for those who made it and a rich,
memorable experience for those who see it.