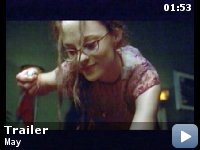 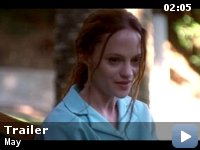 Psychological horror about a lonely young woman traumatized by a difficult childhood, and her increasingly desperate attempts to connect with the people around her.

Storyline
When May was a child, she was a lonely girl with one lazy eye and without any friend but a weird and ugly doll kept in a glass case given by her bizarre mother on her birthday. May becomes a lonely weird young woman, working in an animal hospital and assisting the veterinary in surgeries and sewing operated animals most of the time. Her lesbian colleague Polly has a sort of attraction for her. When the shy May meets the mechanic Adam Stubbs, she loves his hands and has a crush on him. They date, but the weirdness and bizarre behavior of May makes Adam moves away from her. Alone, May has a brief affair with Polly, but she feels rejected again when her colleague meets Ambrosia. When her doll is accidentally broken, the deranged May decides to build a friend for her, using the best parts her acquaintances can offer.

Taglines:
Be Careful… She Just Might Take Your Heart.

The scene where Blank and May meet was a re-shoot. In the original scene, May was not cold and vague, but angry, and insulted people as they walked by on the street. The scene ended with the two of them in the park. That scene is still in the film but entirely replaced and reedited. It is now the scene where Adam and May meet and have there final talk in the park. The scene is told only through close ups, with both May and Adam glancing off camera. They were originally looking at Blank who was sitting beside her. But he was edited out of the scene completely.

Revealing mistakes:
There are two shots in the ending where you can see the "zombie" move: first is after May first finishes attaching the head (breathing is obvious in lower stomach) and the second after May "completes" the head (the neck pulse). The second instance could arguably happen in May's head (as it's after her sacrifice to bring it to life) but it shouldn't be moving before that.

Young May:
What's wrong with my eye, mama?

Do Yourself A Favor… Rent This Movie

Have you ever tried to figure out what something is when your eyes are
closed? You grab something round its cool and smooth to the touch. It
feels solid so it's not some kind of Nerf ball or anything. Here you are
standing in the middle of a room clutching something and you can't quite
tell what it is. The object was an apple, but that's not the
point.


MAY the new film by first time director Lucky McKee is just that kind of
movie. At first maybe it's a romance, then again maybe it's a thriller,
hmm.. Maybe it's some kind of comedy, light hearted or dark. At first
glance
you might just think it's a horror film. But May doesn't aspire to
labels,
it lives in that world beyond them and that's what works and doesn't work
for a film like this.

MAY is one of those movies like Mullholland Drive, From Dusk 'Til Dawn, or
Femme Fatale. There is a moment in the film that will either grab you and
pull you in, or turn you off and produces nothing but loathing. For me
that
moment came as the blind kids are well.. I don't think I want to share
that
sequence with you, but for me it worked.

MAY tells the story of a young women named May (Angela Bettis, Girl
Interrupted) who seems really sweet on the outside, with just a touch of
crazy attached. She had an overbearing mother (Merle Kennedy, Bubble Boy)
who wanted her little girl to be perfect. It's just too bad she needed to
wear an eye patch to correct a lazy eye. The kids in school all laughed
and
called her a pirate. To comfort the girl or make her crazy the film
doesn't
really say, May's mother gives her a prized possession, a freaky looking
doll that has to stay in pristine condition in a glass box.

Somehow May survives this weird childhood and grows up to be stable but a
little nuts. She falls for a guy with perfect hands (Jeremy Sisto, Wrong
Turn) and a girl she works with (Anna Faris, Scary Movie) falls for her.
Everything is perfect until these people turn their back on May, and well
that's when the fun begins..

Angela Bettis is excellent; she is really beautiful, really vulnerable,
and
really expressive without doing much. She gives May this quality that is
understated and yet still intense. I like how she says more with one look
than lots of silly dialogue. She very much reminded me of a female Travis
Bickle. She has a longing for what she can not have and is dealing with it
the only way she know how.

Like in TAXI DRIVER, there is a moment when May is on the phone with Adam
(the Sisto character) and he wants nothing to do with her anymore. Anyone
else would have gotten the point. But not May and so when the realization
comes, just as when Travis Bickle was dumped by Betsey something inside
both
of them snaps.

Another bright spot is Anna Faris. Why she pigeonholed herself in those
stupid comedies is beyond me. She is excellent as May's lesbian workmate.
She is bright and spunky and really funny. I'd love to see her do some
more
legitimate acting work. Hopefully this is the kind of film that she could
use to get better roles. Who knows!!!

Director McKee makes it look easy. He has crafted a fascinating look into
the eyes of a crazy person, by doing what few films can. He allows us to
see that part of ourselves that is manifested in May. We've all at one
time
or another been treated like crap, made fun of, been ridiculed, and maybe
some of us have tried to go over the deep end. I felt pity for May even
if
I shouldn't have. This is a powerful movie, and one of the best I've seen
all year.

If Hollywood ever got off its rear end and decided that a film like MAY
deserved to be shown at the same multiplex as FROM JUSTIN TO KELLY maybe
their would be better quality films out there that the general market
could
consume. Until then it will probably only be discovered by lovers of
film.
I guess that's not so bad.

There are probably others out there that could find fault in a film like
MAY. It's that kind of cinema, either you love it or your hate it. There
is not much middle ground. But do yourself a favor, go and rent this
movie.