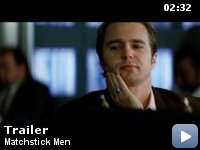 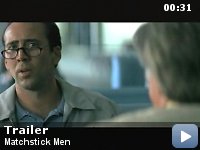 A phobic con artist and his protégé are on the verge of pulling off a lucrative swindle when the former's teenage daughter arrives unexpectedly.

Storyline
Meet Roy and Frank, a couple of professional small-time con artists. What Roy, a veteran of the grift, and Frank, his ambitious protégé, are swindling these days are "water filtration systems," bargain-basement water filters bought by unsuspecting people who pay ten times their value in order to win bogus prizes like cars, jewelry and overseas vacations–which they never collect. These scams net the flim-flam men a few hundred here, another thousand there, which eventually adds up to a lucrative partnership. Roy's private life, however, is not so successful. An obsessive-compulsive agoraphobe with no personal relationships to call his own, Roy is barely hanging on to his wits, and when his idiosyncrasies begin to threaten his criminal productivity he's forced to seek the help of a psychoanalyst just to keep him in working order. While Roy is looking for a quick fix…

Alison Lohman went to the audition dressed and acted like a 14-year-old girl. Ridley Scott only realized her real age when she told him. She was 22 at the time.

Continuity:
When Roy is sitting in his car waiting to meet Angela and about to give up and drive away, the length of the cigarette gets longer and shorter.

A fine brew of psychological character and crime story. A-

Ridley Scott and Nicolas Cage deliver some of their best and most
intelligent work in a few years, even if Matchstick Men is not quite
either's great contribution for this year in film. What they have done,
from Eric Garcia's novel (adapted by The Griffins), come off rather
entertaining, if anything else, and boasts much more thought than would
usually be attributed to such a Hollywood film. Nicolas Cage, who plays
Roy, part anxious/obsessive compulsive, part sly con man, and part father to
a daughter he never knew he had, is a main reason to see this movie. His
performance is on par with someone like Jack Nicholson in As Good As It Gets
for watch-ability of a truly sad lifestyle, and while Nicholson's
performance was and still is funnier and more charming, Cage gets so into
his character, the little mannerisms that pop up more often than expected,
that we feel for the guy even as his eyes get twitchy and goes over certain
spots in his house like a detective. He may be the most believable
obsessive compulsive/con man you'll see in a long while. Add then an
outgoing, occasionally sneaky daughter (Alison Lohman in a performance that
skillfully balances sweetness and irritability, sorrow and playfulness in a
teenage girl) to the mix, along with a protégé-cum-partner (a cool Sam
Rockwell) who has a love/loathe relationship Roy, and there's the map work
for an interesting, if here and there predictable, drama/comedy/crime film.


Along with the performances, which are all above average (Cage could be
deserved of an Oscar nomination come February, and Lohman could deserve the
win possibly), is the visual framework that Scott pushes in each scene. By
getting certain camera tricks, and fantastic editing by Dody Dorn (of
'Memento' fame), the viewer can really get into Roy's head even in the
smaller scenes, the ones that have little to do with the plot and only to do
with the neuroses of Roy (there is even a little touch that I loved when Roy
is waiting online early in the film at the supermarket, and the music in the
background is an excerpt of the mental hospital music from 'Cuckoo's Nest').
This echoes the style that Scorsese used in Bringing out the Dead, also
with Cage, in moving the film to get so into the mood that the story, no
matter how intriguing and important, becomes secondary.

Which brings me to my own personal beef with the movie, and that is the last
fifteen minutes or so. It was clever, up to a point, but as it unfolded, no
matter how much I was still emotionally involved with these people, I felt
that the twists (I won't reveal them here) undermined a lot of the rest of
the film. It will be based on viewer to viewer, but I just thought that it
did a little too much to jab at Roy's lifestyle. And yet, when I walked out
of the theater, though I wasn't sure I had seen anything spectacular, I
didn't feel like I had wasted time and money either. Matchstick Men is
witty, sometimes wonderful moviemaking.