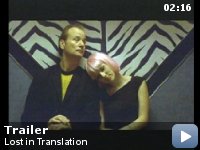 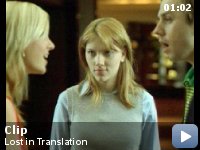 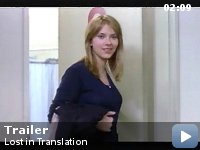 A movie star with a sense of emptiness, and a neglected newlywed meet up as strangers in Tokyo, Japan and form an unlikely bond.

Storyline
Bob Harris is an American film actor, far past his prime. He visits Tokyo to appear in commercials, and he meets Charlotte, the young wife of a visiting photographer. Bored and weary, Bob and Charlotte make ideal if improbable traveling companions. Charlotte is looking for "her place in life," and Bob is tolerating a mediocre stateside marriage. Both separately and together, they live the experience of the American in Tokyo. Bob and Charlotte suffer both confusion and hilarity due to the cultural and language differences between themselves and the Japanese. As the relationship between Bob and Charlotte deepens, they come to the realization that their visits to Japan, and one another, must soon end. Or must they?

Taglines:
Everyone wants to be found.

The close up camera lens on the crane/jib camera, in the TV game show is a Fujinon 5.5mm wide angle lens; it gives a fishbowl, almost distorted look, when physically very close to an object or person.

Continuity:
In the sushi restaurant, Charlotte's chopsticks repeatedly disappear and reappear between shots.

Bob:
Thank you very much.

Ms. Kawasaki:
My name is Kawasaki. Nice to meet you.

Bob:
I've heard of you. Thank you.

I was just like every other curious American filmgoer a few months ago
when
I went and saw Lost in Translation for the first time. That's right, I
wanted to know what in the hell was so great about the movie that critics
were calling possibly the best of the year and a modern masterpiece. I saw
Translation for the first time and liked it, but didn't really know what
they saw in the movie that was so beyond-belief spectacular. But alas, I
believe that every movie deserves a second chance (i.e. – the miracle of
hating Moulin Rouge on round one and having it shoot near the top of my
favorites of all time a year later), so just recently I sat down and
experienced director Sophia Coppola's Lost In Translation
again.


Lost in Translation tells the story of Bob Harris (Bill Murray
in
a role tailor-made, if not even Heaven-sent for him), an American movie
star
that comes to Tokyo to film a whiskey commerical for which he will be paid
2
million bucks. Staying in the same Tokyo hotel is Charlotte (Scarlett
Johanssen, radiant and mature at only 18), a newlywed tagging along with
her
rock photographer husband, John (a typically awkward Giovanni Ribisi).
Along
the way, Charlotte and Bob run into each other and begin a 'brief
encounter'
that profoundly affects them both.

When the movie hits you right, it's a pure pleasure from its
unassuming start (a beautifully lit shot up Johanssen's underwear-clothed
behind) to its ambiguous but meaningful ending. It begins as a comedy of
culture clash, Harris sarcastic and confused at the Japanese when entering
his hotel, and even more befuddled in a hilarious scene where he shoots
the
whiskey commerical (and one later during a photo shoot). Coppola delivers
Bob into her movie with the impression that it'll be all about him (he has
plenty of great scenes, even at just the beginning), but Charlotte enters
the story, and we're never quite the same. Scarlett Johanssen plays
Charlotte with just the right amount of emotion that her initially morose
and soul-searching character doesn't seem silly. At one point, she
tearfully
admits over the phone, "I don't know who I married." This may come off as
silly, but consider her position: far away from home, newly married, in a
big intimidating city, and her husband is away on a photo shoot. Bob, on
the
other hand, seems to have it made, but Murray lets a current of loneliness
run across that memorable face that seems to hint at something more. He
gets
comical faxes from his wife about bookshelves and carpet samples, but he
gives off the impression that he's come to the point where he doesn't even
care anymore. Bob is certainly alone for a time in Tokyo, but Murray gives
off the impression that things at home aren't too hot either.

For the first third of the movie, director Coppola displays her first
brave
choice in filmmaking by keeping Bob and Charlotte apart. During this time,
the smooth, languid pace of the film falls into place, and by languid I
don't mean 'boring.' Upon my first viewing of Translation, I wasn't
convinced of Coppola's choice to keep the movie so predominantly low-key,
but I've realized that there's a reason for it. The movie sustains this
amazing vibe that doesn't stunt its progress, but propels it with a
driving
fluidity. A few times, though, Bob and Charlotte do see each other without
officially meeting. One time in particular occurs in a crowded elevator –
the two glance at each other, faintly smile, and possibility is born. The
first section of the film doesn't just serve to show its two characters
completely apart – it makes you think of how many life-changing
connections
you've missed in the past by just being passive and solitary.

Coppola successfully juggles Bob and Charlotte apart, but when they do
meet,
it's pure magic. They begin voyages out into the hustle and bustle of
Tokyo,
and the film almost takes on a perspective that differs from its earlier
view. Before, we saw Bob Harris and Charlotte, respectively, at their most
private and vulnerable. While out on the town, the film seems to sit back
and just let them have fun. Thank God, for Bill Murray's rousing rendition
of Elvis Costello's "(What's So Funny 'Bout) Peace, Love, and
Understanding"
is a blast. During this time, it seems that Bob and Charlotte have
forgotten
their insomnia and loneliness, but it's not gone forever. Even during
their
night on the town, we see moments where they sit silently, pensive and
confused. The movie is a comedy in some sense, but it escalates into a
pervading tragic feel. At one point, Charlotte says to Bob: "Let's never
come back here again, because it will never be as much fun." I was struck
deeply by this because, well, they had fun, but only in the sense of
putting
off more loneliness and desperation.

The movie takes a while to truly glean out the deep-seated motivations of
both of its characters, but they become fully-realized in a marvelous
scene
where Bob and Charlottelay fully-clothed in bed together. Here, they
handle
the 'big' questions in life, and not "Where did you go to college?" or
"What
did you want to be when you were little?" but "What is my purpose?" and
"Does marraige get easier?" I was amazed at the honesty of the character's
responses. Bob relates to Charlotte the experience of having children and
the ongoing struggles of marraige, but a tinge of fear and apprehension
runs
through his speech. Charlotte hasn't really figured things out for herslef
yet – she says she's tried just about everything but hasn't found that
niche. Coppola's screenplay takes these two separate beings, far apart in
age and experiences, and makes a profound statement – both are in the same
exact emotional limbo. Charlotte is confused and worried, but Bob is
regretful and washed-up. In a way, these two are some form of deeply odd
soul-mates. That is the heart and soul of Coppola's amazing
work.

I couldn't end this review without mentioning another star behind the
scenes
of the movie that is nearly as effective to the film as
Director/Screenwriter Sophia Coppola. That is cinematographer Lance Acord,
who should just start writing his Oscar acceptance speech now. He has
worked
on Coppola's husband's (Adaptation, Being John Malkovich director Spike
Jonze) films before, but this is his finest, most beautiful work yet. He
captures Japan, and the film's characters, with such a
soft-but-colorfully-abstract flare that it's nearly inexplicable. I often
wondered why, beyond the fact that they have so much to think about, Bob
and
Charlotte (especially her) are seen staring out windows so much. If they
see
Tokyo with the same awe-inspiring glow that the film does, they have no
better reason.

Perhaps the movie didn't sit as well with me the first time because I kept
attempting to figure out what the movie was. It has great comedic flair
with
Murray's wonderful work, but it's also perhaps one of the saddest and most
moving films I've seen in a long time. It's some form of a romance, too,
but
it's not about when they'll kiss or when they'll hit the sheets (one kiss
on
the cheek becomes unbearably awkward). It also has that Affair to Remember
vibe too, where the journey of two souls that find comfort will eventually
have to come to an end. Its end, though, defies classification, as does
the
rest of the film. Many times during the film's quaint, quietly moving
finale, I expected lush music to start playing to underscore the
escalating
sadness of the film. It doesn't. Coppola simply lets her two amazing leads
do the work. When the film does arrive at its final, ambiguous moment, it
all just seems perfect. The catchy Japan-pop soundtrack that runs
brilliantly throughout the film begins to play, and I find myself with a
huge regret: that I won't be able to savor the subtle chemistry of Bob and
Charlotte, and that a flat-out masterpiece in American film is at its end.

TagsJapan Tokyo
The Rundown
The Dreamers