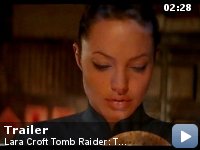 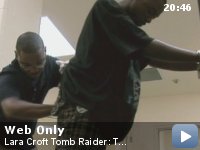 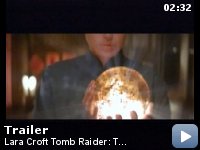 Lara Croft is on a quest to save Pandoras box.

Storyline
Intrepid British archaeologist Lara Croft has made perhaps the most important archaeological discovery in history: an orb that leads to the mythical Pandora's Box. Unfortunately, the orb falls into the hands of Jonathan Reiss, an evil scientist who deals in killer viruses and hopes to sell the secrets of the box as the ultimate weapon. Recruited by British Intelligence to get the orb back from Reiss, Lara recruits Terry Sheridan, a British marine turned mercenary (and her former love interest) to help. The two embark on an adventure that spans continents in an attempt to regain the orb…

Angelina Jolie is the only actor/actress in the movie to be American-born.

Revealing mistakes:
When Lara is kissing Terry on the boat, a piece of tape is visible holding up her towel.

Jimmy Petraki:
They found another one. There's going to be no treasure left by the time she gets here.


Angelina Jolie returns as a distaff Indiana Jones in "Lara Croft Tomb
Raider: Cradle of Life," an action/adventure film (based on a video
game character) that is just goofy enough and inane enough to be almost
entertaining.

In this follow-up adventure – which is designed to give historians and
social studies teachers a severe case of the heebie-jeebies – Lara, the
world-famous archaeologist and adventurist, finds evidence that the
mythical Pandora's Box is really no myth at all, but rather an actual
object loaded with enough plague and pestilence to wipe the entire
human race off the face of the planet. It lies buried somewhere, hidden
by Alexander the Great in the 4th Century B.C. when he discovered how
virulent and deadly the contents of the box really were. Now,
twenty-four centuries later, Lara has to try and prevent an evil
billionaire capitalist from locating the container, prying open the
lid, and bringing an end to civilization as we know it.

Though the storyline is clearly not one to be conjured with, all that
really matters in a movie such as this one is that the action move
quickly and the stunts be sufficiently enterprising to engage the
audience. Credibility is the last prerequisite in a Lara Croft
adventure, as evidenced by the fact that if Lara isn't parachuting
smack dab onto the deck of a ship or into the passenger seat of a
moving jeep, she's hitching a ride on the back of a great white shark
and riding it to safety. Ah well, it's all in good fun, I suppose, and
Jolie not only looks stunning in all the outfits she's been given to
wear, but seems to be having a fine time playing along with the joke.

The ending is inevitably anticlimactic, but viewers can have a pretty
good time getting there at least.

Johnny English
All the Real Girls