Interstate 60: Episodes of the Road 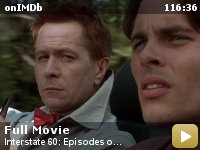 A confused young man (Marsden) takes a journey on a road that doesn't exist on any map.

Storyline
Neal Oliver is a young artist, but his father doesn't like his choice and wants him to go to Oxford. Everything changes after Neal's meeting with O.W.Grant, who grants exactly one wish per person, as his name suggests. Neal wishes for answers, and so he must travel to the nonexistent Danver by the nonexistent Interstate 60. In this trip he hopes to find the girl of his dreams, following the trail of her photos on the advertising stands along the route. Many encounters await him ahead. Will he receive what he asked for?

Taglines:
All your answers will be questioned.

The character of O.W. Grant is a compilation of many different trickster figures in world mythologies. It is stated that he is half-leprechaun, which is shown in his red hair. Also, the monkey pipe is a reference to the Monkey figure of Eastern mythologies. The pipe's smoke can also be interpreted as a reference to Djinni.

Continuity:
Pennants at gas station disappear and reappear between shots.

Neal Oliver:
[voiceover]
Given an infinite universe and infinite time, all things will happen. That means that every event is inevitable, including those that are impossible. And it's as good an explanation for all of this as anything else. Now, a lot of stories start in bars, so that's where we're going to start this one. Not because I was there – I wasn't. But because it's a damn good introduction to a very unique… fellow.

One of the best films I've seen in a long time!

Once in awhile there's a film that comes along that is amazingly fresh in
it's idea. Interstate 60 is one of the best movies I've seen recently. I saw
in a rental store and there was only one copy they had. I didn't see it in
on the shelves of the other rental chains I usually visit several times per
week. I debated whether or not I should even rent the movie. But, it had
Christopher Lloyd in it…so it couldn't be that bad.


I was very surprised at how much I enjoyed the movie. It's fun and utterly
different than what I was expecting it to be. Interstate 60 cannot be
classified into a single genre. It is many genres, from fantasy to comedy,
to romance, to drama…and back again switching between these and so much
more.

The script is very well written, with many memorable lines of intelligent
dialogue. There are several notable cameos by high profile actors such as
Michael J. Fox, Ann-Margret, and Kurt Russell. All of their performances
made use of their stellar acting abilities. Another must see role was played
by Chris Cooper.

Interstate 60 should really have had a wide theatrical distribution. It has
the look and feel of a big budget movie, and surely has a wide ranging
appeal. A lot happens in this movie and that is a good thing! It's a shame
that a lot of people will probably never see or hear of the movie. If you
can find it around you should definitely rent it. You also couldn't go wrong
with just buying it, I know it is next on my list of movies to buy for my
personal collection. I give this exceptional movie a 10 rating out of a
possible 10!

TagsCanada
The Blind Swordsman: Zatoichi
Once Upon a Time in Mexico