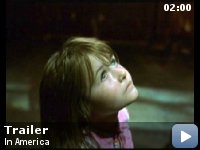 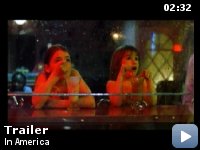 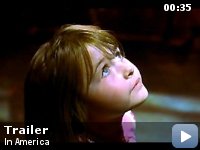 An Irish immigrant family adjusts to life in the United States.

Storyline
Following the tragic death of their two-year-old son Frankie, Irish couple Johnny and Sarah Sullivan and their remaining two offspring, 10 year old Christy Sullivan and 5 year old Ariel Sullivan, emigrate illegally to the United States via Canada with little in their pockets. Their final destination is Manhattan where Johnny hopes to work as a stage actor. They move into a unit in a run town tenement housed primarily with drug addicts, transvestites and one tenant coined "the man who screams". They do whatever they can to eke out a supportive family environment in this difficult situation, the support which ultimately extends to those around them, most specifically "the screamer" who turns out to be an African-American artist named Mateo with AIDS. But the memory of Frankie hangs over the family in good and bad ways, especially as Sarah learns she's pregnant. Christy…

The child actors (Sarah Bolger and Emma Bolger) called "cut" and "action" in every scene. This was decided by the director and the girls early during filming, so that it would make the acting easier for them.

Revealing mistakes:
In the ball throwing scene at the carnival, as Johnny throws the last ball and the camera goes to a blurry slow-motion movement, you can see that the ball is still in his hand as it goes down yet a ball is seen entering the hole.

Two Stars Are Born, in a Touching, Powerful, Sensitive, Positive and Magnificent Movie

Johnny (Paddy Considine), Sarah (Samantha Morton), Christy (Sarah
Bolger) and Ariel (Emma Bolger) are a catholic Irish family, looking
for a better life in America. They lost their beloved son and brother
Frankie in an accident, and the family, specially Johnny and Sarah, is
traumatized with his death. Johnny tries to find a job as an actor, but
he lost his emotions and feelings with the death of Frankie and can not
find a job, working as a taxi driver to support his family. Without any
money, they move to a junkie building, where they become friend of
Mateo (Djimon Hounsou), an African painter who has a serious disease,
apparently AIDS. Their lives change and Johnny and Sarah learn to face
and heal their wounds with the arrival of the baby and the friendship
of Mateo.


"In America" is a magnificent and very positive tale of friendship and
survival. The story is very simple and dramatic, but never corny, and
the very convincing performance of the cast is amazing and touching.
Jim Sheridan was able to direct the six years old Emma Bolger and
achieve an outstanding performance in the role of Ariel. Her eleven
years old sister, Sarah Bolger, has also a stunning dramatic and key
role in the story. I dare to write that two stars are born!
Summarizing, "In America" is a highly recommended touching, powerful,
sensitive, positive and magnificent movie. My vote is nine.