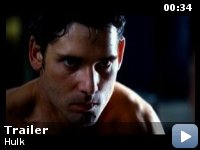 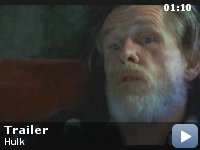 Bruce Banner, a genetics researcher with a tragic past, suffers an accident that causes him to transform into a raging green monster when he gets angry.

Storyline
Bruce Banner, a brilliant scientist with a cloudy past about his family, is involved in an accident in his laboratory causing him to become exposed to gamma radiation and Nanomeds (A tiny life-form that is supposed to heal wounds but has killed everything with which they have made contact). Confused and curious about his survival, Banner discovers that since the accident, whenever he becomes angry he transforms into a giant green monster destroying everything in sight in an act of fury. Bruce's mysterious past and the answer to why the radiation had this effect becomes revealed to him as his Birth Father David Banner intervenes with hopes to continue experimenting on him.

Taglines:
The inner beast will be released

To prepare for his role as General Ross, Sam Elliot read the Hulk comic books. He had doubts about growing a moustache, since the Army doesn't encourage facial hair, but was convinced by Ang Lee to do so.

Continuity:
The breast pockets on Betty Ross's denim jacket switch from buttoned to unbuttoned between shots when she is confronted by David Banner in her house at night, and again, later, when she approaches the Hulk in downtown San Francisco.

Dr. David Banner:
[absorbing Hulk's energy]
Sleep, Bruce, and dream forever. Struggle no more… and give me all of your power.

Bruce Banner:
You think you can live with it? Take it! TAKE IT ALL!


"Hulk" is a film which is widely considered a failure, both financially
and artistically. Yet in the latter category this movie has a lot on
offer: masterful editing, good acting and the direction of a true
master.

What Ang Lee has tried to achieve, namely merging the pulp-story of the
Hulk with the scale and drama of a Greek tragedy has been well
achieved. The scope of the story and its effects on the characters are
only to be taken seriously on a truly grand scale, and by supplying the
protagonists with interwoven back-stories Lee and his screenwriters are
making it clear that this is not to be seen as a realistic story, but
an epic metaphor.

Special kudos goes to Timothy Squyres, who does one marvelous job of
creating an editing similar to a comic's design. This pays tribute to
the source material's pulp origins as well making an impressive visual
statement. "Hulk" looks and feels like no other film, which makes it
one of the most interesting, if not one of the best comic- adaptations
of all time.

The crux is that this movie does not know who it's aimed at. The
intellectual Ang Lee- connoisseur picks his nose when it comes to the
Hulk, simply due to its humble roots, while the average
popcorn-cinema-goer is slightly irritated when confronted with the
films "odd" approach to comic-movies. This means that only viewers
which are a bit of both can truly appreciate this masterpiece.

All the other elements for a good piece of entertainment are there and
present: Eric Bana is, as usual, fine as the tormented soul which
manifests itself in green rage, Jennifer Connelly is as solid as ever
and Nick Nolte steals the show with what is a truly weird turn as Bruce
Banner's/the Hulk's dad. The visual effects are beautifully executed as
well. There is not much left to be desired.

It's a pity such an interesting and brave film gets a rating of
slightly above 6 at IMDb.

TagsUSA
A Tale of Two Sisters
The Best of Youth