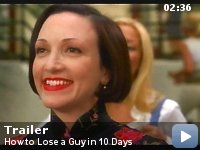 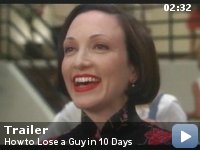 Benjamin Barry is an advertising executive and ladies' man who, to win a big campaign, bets that he can make a woman fall in love with him in 10 days. Andie Anderson covers the "How To" beat for "Composure" magazine and is assigned to write an article on "How to Lose a Guy in 10 days." They meet in a bar shortly after the bet is made.

Storyline
Benjamin Barry is an advertising executive competing with two female co-workers for a major campaign for a diamond merchant. He cuts a deal with his competitors that the account is his if he can make a woman of their choice fall in love with him in 10 days. In comes Andie Anderson who, in turn, is writing a story on how to lose a guy in 10 days as a bet with her boss to be allowed to write more substantial stories. With a hidden agenda in each camp, will either party be able to complete their mission?

Taglines:
One of them is lying. So is the other.

The name, style and content of Composure Magazine all make it a dead ringer for Cosmopolitan Magazine.

Continuity:
Andie's hair changes from very wavy/curly to nearly straight between shots in the bathroom.

Jeannie Ashcroft:
[reading]
"And only then will the people of Tajikistan know true and lasting peace." Andie, it's brilliant. It's really moving. But it's never going to appear in Composure Magazine.

A film not worthy of all these bad reviews..read on and I'll explain.

So its fluffy and predictable. It's unrealistic and sickly sweet. Who
cares…this film pretends to be nothing more than what it is intended to
be. Light romantic comedy.

Since stars like Cary Grant, Kathrine Hepburn and Irene Dunne, lit up our
cinema screens in the 1930's with films like The Awful Truth, Bringing up
Baby and My Favorite Wife, Hollywood and of course the movie going public
have reserved a special place in their hearts for RomComs, screwballs and
battle of the sexes comedies.

Identical plots, Identical jokes but none the less jokes and plots that will
never go out of style and will always be relevant in any age or location,
whether it be New York of the 30's or New York in the present
day.

Hollywood has always worked on the basis that they stick to what has been
tried and tested and has proved to work, that is why with a small plot
change and a rehash of old jokes and situations they are able to reinvent
their movies for a new generation of film buffs. It was through this formula
that Doris Day and friends were able to continue RomCom history throughout
the 60's and every one of them box office winners.

A recent example of this would be Down With Love starring Ewan McGregor and
Rene Zelwegger. Who could not see plot comparisons to Pillow Talk or Lover
Come Back? Yet it did not make this film any less enjoyable. Our
entertainment lies in seeing our actors of the day fill the roles of the
great actors of yesterday and how the scripts and jokes are adapted and told
within a backdrop of 21st century life etc.

Matthew McConaughey and Kate Hudson made this film with impeccable comic
timing and enjoyable performances. Of course with Goldie Hawn for a mother,
Hudson comes straight from comic stock so I would have been disappointed if
she failed to meet the challenge but she didn't. Some of her facial
expressions and mannerisms almost had me convinced I was watching an old
episode of "Laugh In"

McConaughey also held his own and proved himself to be a gifted comic as he
did in the Wedding Planner.

This plot seemed quite original and as a battle of the sexes comedy, they
seldom come as good as this. Again the formula was followed and we were
under no illusion on what the final outcome would be, but their journey to
this ultimate destination is what we find entertaining.

This type of film has been popular for seventy plus years and their
simularities are what makes them so. Instead of slamming them..watch some of
the predecessors and appreciate their origins.

Be thankful they are still making these types of movies today as in an era
which is threatening to be devoured by action thrillers, fantasy adventure
and shoot 'em ups this seems to be the only diversity left in motion
pictures.