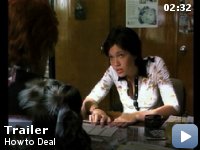 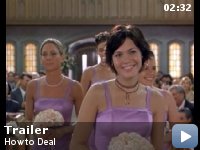 A teenager (Moore), disillusioned by too many examples of love gone wrong, refuses to believe that true love exists. Then this new guy (Ford) comes along…

Storyline
Halley is a young high school student who is disillusioned with love after seeing the many dysfunctional relationships around her. Her parents are now divorced and her father has a new young girlfriend she doesn't care for too much. Her mother is now always alone; and her sister is so overwhelmed by her upcoming wedding that she barely leaves the house anymore. On top of that, the shallowness of all the girls and guys at her school convinces Halley that finding true love is impossible. A tragic accident, however, leads her to meeting Macon, and suddenly Halley finds that true love can occur under unusual circumstances.

Taglines:
Rule #1 There are no rules.

I almost considered passing up watching this one, but I'm glad I didn't.
This movie has all the hallmarks of a bad afterschool special, actually four
or five of them smashed together. But just when you think it's about to fall
off a cliff of cliches, something unexpectedly intelligent happens. Just
when it's about to turn into a tear-jerker, the director puts her camera,
almost joyfully, above the rain to show everyone shielding themselves with
the church program. Just when you think it's going to turn into a soppy love
story, the characters flee from each other, scared out of their minds at the
possibility. Just when you think it's going to be a soap opera, Mandy Moore
acts her way out of the paper bag that people seem to pigeon-hole her into.
You get the idea.


The actors all do well, especially Allison Janney, who puts a real edge to a
role that could have easily been mush. I must admit, though, Peter
Gallagher, usually a reliable guy, doesn't do much with his aging hipster
role. The real joy here is Moore. She's got just enough stuff to hook you
into the story, and she's just raw enough that she'll make you believe. And,
yeah, the dialogue is corny here and there, but not outrageously so. I have
to hand it to the director to keep everyone loose enough to pull off some of
these lines, and to make the shots interesting enough for us to care what
happens when they do.

The plot, which does have its convolutions and weird devices, is not nearly
as interesting as Halley's growth as a character. It's basically a character
piece wrapped in a teen romance. And Moore brings it all
together.