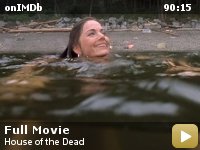 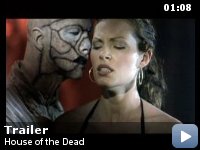 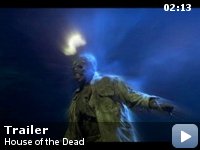 A group of teens arrive on an island for a rave–only to discover the island has been taken over by zombies. The group takes refuge in a house where they try to survive the night.

Storyline
This film is a prequel to all of the The House of the Dead video games. Set on an island off the coast, a techno rave party attracts a diverse group of college coeds and a Coast Guard officer. Soon, they discover that their X-laced escapades are to be interrupted by zombies and monsters that attack them on the ground, from the air, and in the sea, ruled by an evil entity in the House of the Dead…

Reviews were so bad that Danish cinemas refused to buy it.

Anachronisms:
When Rudy talks to Alicia about Casper's death, an electric light is on, even though the house was built and furnished before the light bulb was invented. Uwe Boll himself pointed it out in the commentary.

Simon:
It's, uh, somewhere in the San Juans. You must know where that is, right Skipper?

Capt. Victor Kirk:
No, I don't think so.

Salish:
Yeah, forget it! Forget it! That means stop talkin' and start walkin'!

There are people out there who will greenlight anything! That is the only
explanation I can offer as to why the House of the Dead movie exists. And
that's only scary part to the whole movie. It's so bad you'll go off
movies
forever. I seriously wanted to switch this off and turn the TV over to the
Paint Drying channel but I was bound by my word to suffer the whole thing.
I
don't know why I do these bad things to myself.

As if it matters, here's the basic jist of the 'story'. A group of
twenty-somethings are so desperate to go out to some island in the Pacific
Northwest (Canada actually, because it's cheap) for the 'Rave of the
Century' (which consists of about 8 people and un-raving music) that they
pay some craggy old fisherman $1000 to take them there after they miss the
main ferry. That's gotta be some rave to be worth all that dough! The
fisherman warns them that the island is also known as the Island of the
Dead
(hang on-I thought this was HOUSE of the Dead?) and that they are all
doomed
yadda yadda yadda.

First faults here. Why would a tiny little rave (of the Century my foot!)
be
held on some remote island? Why would anyone willingly pay loads of money
to
get it? Why pay even more to the craggy old fisherman to take them back
when
they could just come back with the others?

Once they arrive they discover that the rave (which consists of about 2
tents, a small stage and a port-a-john) has been smashed, there's blood
everywhere and no one is around. What would any rationally thinking person
do? Run for their lives of course. But no, these clueless, obviously blind
people decide to go look for them. Soon enough they discover an old
ramshackle house that's 50 times as big on the inside as it is on the
outside. Another half hour of stumbling around in the forest follows, as
an
excuse to kill of some of the lesser characters, and after much tedium
they
arrive back at the house again. The characters, like the movie, go
nowhere.

Jammed into this ghastly disaster is a superabundance of gibberish
dialogue,
heinous acting, mumbo-jumbo exposition and zillions of clips from the
once-popular arcade game of the same name. Why this was universally
accepted
as a good idea with the filmmakers I'll never know. The clips have no
reference to any of the scenes and only degrade this trash even further,
if
that is at all possible.

It has nothing to do with the game save for some cheap, throwaway line at
the end. It makes Resident Evil look like cinematic glory. Hell, even the
Double Dragon movie seems multi-Oscar worthy in comparison to this junk.
The
only one who comes out of this with his dignity still intact is Jurgen
Prochnow. He could have just taken his money and ran but he tries his best
with the awful script and brings a tiny bit of pathos to his character.
The
rest of the cast suck I'm afraid. The characters are idiots and deserve to
die.

Plus, if you cut out the swearing and pointless nudity, I see no reason
why
this film cannot be shown on Saturday morning TV. It's not frightening in
the slightest. Pirates of the Caribbean is more scary than the skeletal
bad
guys in this film. And where did all those bad guys come from anyway?
There
were only a few people on the island to begin with. I guess this justifies
the reason they chose to reuse footage over and over. I kid you not,
you'll
see the same zombie die a dozen times.

Who's ultimately to blame for that scandalous waste of celluloid? None
other
than director Uwe Boll. His control over the movie is non-existent. You
can
clearly the see actors have no idea what they should be doing and that the
zombies aren't really taking it all seriously. The actors seem like
they're
reading off cue cards as they constantly pause in the middle of long
sentences and carry on talking as soon as they see the next card. It all
feels very unnatural.

Plus the film is shot like a two-part mini-series. I have indeed seen
better
TV productions. And don't get me started on the editing. The film is an
incoherent babble with thousands upon thousands of pointless shots and
dozens of meaningless camera pans. No real skill or talent was put into
making this at all. It truly baffles and boggles the mind how movies this
unfathomably bad can get made and George A. Romero can't even get anyone
to
take his calls. House of the Dead makes some idiotic reference to Romero
in
a lazy attempt to be 'post-modern' but it only irritates that they think
THIS is in the same league as a REAL zombie movie.

For what it's worth, the 1.85:1 anamorphic picture looks great and the
Dolby
5.1 soundtrack is clean but very unimpressive and only serves to pronounce
the heavily over-used ADR even more. The DVD comes with extras but why
torture yourself. Isn't this review warning enough? Stay away! You are all
doomed I tell you! Doomed! Doomed!!!