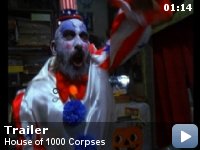 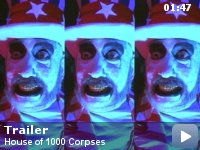 Storyline
In "House of 1000 Corpses", two young couples take a misguided tour onto the back roads of America in search of a local legend known as Dr. Satan. Lost and stranded, they are set upon by a bizarre family of psychotics. Murder, cannibalism and satanic rituals are just a few of the 1000+ horrors that await.

Taglines:
There's no turning back!

Sid Haig beat out Jon Polito and Red West for the role of Captain Spaudling.

Audio/visual unsynchronized:
When the robber with the ski mask points his revolver at Captain Spaulding for the last time you hear the sound of the hammer being cocked, yet in subsequent shots the hammer is uncocked.

Dr. Wolfenstein:
Ah! The doctor is in! Don't scream, don't move. Stay tuned for channel 68's Halloween Eve movie marathon! I'm your host, your ghost ghost, with the most, Dr. Wolfenstein! I will be with you until the end!


In my opinion, House of 1000 Corpses is a fan movie. Fans of both the
horror genre and Rob Zombie are likely to love it. Though I do not
count myself a fan of either, I do like both at times, and I am quite
familiar with both. Those familiar with Rob Zombie are likely to be the
only ones who completely 'get' this clever little film – appreciating
its depraved sense of humor and nihilism. Zombie's themes are fairly
consistent – evil (without the usual religious connotations and
clichés), murder, sex, insanity, and stereotype "hillbillies". Zombie's
world is not a place for people who are terribly concerned with
reality, but, for Zombie himself, it seems to supply endless muse for a
prolific and interesting commercial creativity.

Two couples traveling across country and working on a book on bizarre
roadside attractions stumble across a filling station / theme park run
by a vaguely evil clown with a bad attitude – Captain Spaulding.
Spaulding teaches them of a few local legends, including a mad surgeon
who worked in a local insane asylum and came to be known as Dr. Satan
for the grotesque surgical procedures he applied to mental patients in
secret. They pick up a pretty blonde hitch-hiker on their way to see
the tree where Dr Satan was hung, and run into some car problems, so
the hitch-hiker invites them to her family house. The family,
apparently headed by the phenomenally weird Karen Black, makes The
Addams family look like the Brady Bunch.

My narrative has described the first 20 minutes or so of the film, and
at this point the film, much like RZ's songs, is so campy that it seems
a straightforward horror comedy. However, once our protagonists are in
"the house", the plot takes a decidedly more sinister spin, and never
lets up from that point forward.

This film successfully and entertainingly portrays all of RZ's themes
in about the same proportions as his music. Of them all, sex is the
least explored, and I, for one, am thankful for that. The film also
walks a delicate line between Hannibal Lector grotesque art realism and
supernatural forces. For example, at one point, one of the bad guys
turns on a cassette player with low batteries so that the voice
recorded on it sounds extra-satanic.

If you have problems with blood and other bodily fluids, and utterly
repulsive surgically induced variations on the human body, you might
want to avoid this film. If you don't have any great objections to
standard hardcore horror imagery, or if you like it, you might want to
see this. It is masterfully visualized and does a much better job of
making horror into art than the standard Hollywood horror fair. This is
Rob Zombie's art, and he does it much better than most. This first
major effort in film bodes well for his future use of the medium, and I
will look forward to his next.