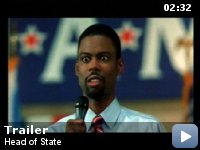 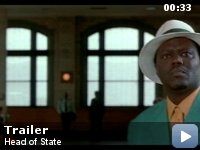 When a presidential candidate dies unexpectedly in the middle of the campaign, Washington, D.C. alderman, Mays Gilliam is unexpectedly picked as his replacement.

Storyline
Mays Gilliam, a Washington D.C. neighborhood Alderman, is about to be red-lined out of his job. But after the untimely death of the party frontrunner, Gilliam is plucked from obscurity, and thrust into the limelight as his party's nominee–for President of the United States. The players in Gilliam's life include: Mitch Gilliam, his unsophisticated older brother who becomes his running mate; Kim, his ex-girlfriend who had once dumped him, but who now has a sudden change of heart as she sees a chance at becoming First Lady; Martin Geller, his campaign manager; Lisa Clark, the woman who truly believes in Gilliam; and Debra Lassiter, the woman who doesn't have faith in his candidacy, and is serving as his reluctant advisor.

Taglines:
The only thing white is the house.

The scream that was used after Chris Rock says, "Security," was actually done by Adam Sandler.

Continuity:
When Mays gets picked up in the car he is soaking wet. Then when he gets out of the car his suit is completely dry.

Mays Gilliam:
Who the hell are you to call this place a rat-trap? This is my neighborhood. This is where I'm from. I got my first bike stolen right there.
[pointing]

Mays Gilliam:
My daddy got his bike stolen right there. When I have a son, I hope he's fortunate enough to get stuck up, right there!

Back in the late 70's and through the early 80's, Richard Pryor made a
string of formulaic type movies, the formula being a street-wise black
man
is unexpectedly placed in a position of great responsibility or privilege
for which he is totally unprepared: (Silver Streak, Brewster's Millions,
Critical Condition, Bustin Loose). Inevitably, the hero not only
succeeds
in his newfound role, but excels, all thanks to his streetwise
background,
which allowed him to confound the numerous white people in these movies
who
were either thick-headed or cruel mercenaries.
This formula, not surprisingly, ran out of gas before Pryor's health
started
to go downhill, just like the Elvis movie formula did. It was all very
unfortunate, because it repackaged Pryor, a true hardcore radical
comedian
into a middle of the road movie star palatable to a broad based audience.
He never reclaimed what he had lost, and neither did Elvis.
"Head of State" recycles the same Richard Pryor formula, only updating it
to
a hip-hop fed generation. Chris Rock plays the Richard Pryor -type
character, a Washington DC alderman who catches the attention of
Democratic
party headquarters as an innovative replacement candidate for the nominee
who dies in a plane crash only weeks before the general election. The
overall effect is the same watered-down comedy that the RP movies left me
with. The backroom cunning and maneuvering is all supposed to look very
devious, and Chris Rock turns it all to his advantage, outsmarting the
professional politicians at every turn.


The attempted humor in this movie left me cold and annoyed. There were
joking references to the assassination of Malcolm X and JonBenet Ramsey
that
I guess were supposed to make me laugh. They didn't, and nothing,
absolutely nothing, in this movie did. The slapping, punching, and
assault
& battery incidents are continuous and an assault on the senses. Someone
has been watching a lot of 3 Stooges. Robin Givens plays a disgruntled
ex-girlfriend of the candidate who is repeatedly victimized. In light of
her experiences with Mike Tyson, this seems to hit a new low in bad
taste.
Rock speechifies in his presidential debate scene on the benefits of
knocking children in the head when they misbehave, and receives a
standing
ovation. Not funny.

The problem with a watered-down movie is that it always hedges its bets,
flip-flopping between earthy comedy and the serious tones. This movie,
which actually has an interesting premise, would have been a lot better
if
it had gone way over the top, and not pandered to any sense of reality or
decorum, like say for example, "Animal House." Put Chris Tucker or Ice-T
in
the candidate role, with no attempt to be loved by the audience. Bring
the
'hood to the White House, and rename it the Black House. Load it with
sex,
drugs, rock & roll, and FUN!

I couldn't help but feel cynical about the Hollywood establishment's
political vendetta associated with this movie. Chris Rock's opponent has
an
identifiable Texas twang, is personally venemous and slow-witted. Sound
familiar? This same establishment will also back liberal governors and
senators with expensive haircuts, but has never seriously gotten behind a
black presidential candidate. I guess if you produce a movie about it
instead of making it happen, that excuses you.