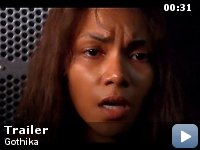 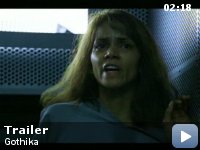 Ghost story in which a repressed female psychiatrist wakes up as a patient in the very asylum where she worked with no memory of why she is there and what she has done.

Storyline
A criminal psychologist awakens to find herself a patient in the institution where she works, with no memory of the murder she's accused of committing. As she tries to regain her memory – and her freedom – a vengeful spirit manipulates her.

Halle Berry broke her arm filming a scene with Robert Downey Jr.. Downey was supposed to grab her arm and twist but twisted too hard and the arm snapped. Production was halted for eight weeks.

Continuity:
The position of the cigar on Dr. Douglas Grey's desk.

Chloe:
He came back again last night and tore me like paper. He opened me like a flower of pain, and it felt good. He sank into me and set me on fire, like he always does. Made me burn from the inside out.

Miranda:
How did you know it was the devil?

Don't believe the hype, this is worth a look


Stars operating at the level of Halle Berry and Penelope Cruz are bound
to disappoint critics along the way, especially when the critics are
just waiting for some sign of weakness upon which to feed. While there
is nothing wrong with any of the acting in this film – these are not
the kinds of roles Oscar winners and nominees are expected to indulge
in.

What's more, Berry and Cruz signed onto a film made by a production
team which has typecast itself with some fairly disappointing ghost
stories / horror films involving big-names in the recent past.

Finally, this is one of those cases where the trailer was so good that
the film could not possibly follow it.

If you approach this film without expectations, and with an open mind,
you will be entertained. It's a tight, disturbing
psychological/supernatural thriller which, though a little predictable
at times, nevertheless offers some frightening imagery and a few good
solid scares. That said, this is not a film for people who have trouble
paying attention or for people who need straightforward answers. If you
don't really pay attention to what is going on in this film, you could
easily dismiss it as a more adult version of Sixth Sense or just
another dumb ghost story. This film deserves more credit than that.

Personally, I don't think it's a ghost story at all- but that is a
question best left open.

I have seen a number of films by this team – House on Haunted Hill, 13
Ghosts and Ghost Ship. Of these, I found 13 Ghosts and the House on
Haunted Hill to be entertaining, but not very intelligent. Ghost Ship
was tremendously disappointing – even Gabriel Byrne could not save that
film. Gothika is easily the best of the lot, and also the darkest. The
film is shot in dark blue, black and gray tones, and the use of
lighting is nothing short of artistic. Despite the cliché title, the
occasional plot clichés, and all the negative publicity generated by
critics, I found this film to be surprisingly entertaining,
intelligent, and disturbing.

Most of the 'plot holes' cited by some reviewers here on IMDb are more
likely gaps in the attention spans of the viewers themselves or
intentional ambiguities designed by the production team. This, unlike
any of this team's previous work, does not provide unambiguous
explanations.

Cruz and Berry are, respectively, patient and psychiatrist in a high
security prison for the criminally insane. The Gothic environment of
this facility is not meant to be realistic, but surreal, and the effect
works. From the first time you see the place, you question its own
reality. The film constantly manipulates mood through cinematographic
techniques like this.

Shortly after the film opens, Berry finds herself experiencing what
some of her allegedly delusional patients talk to her about. Robert
Downey's portrayal of her friend and, now, therapist, is uneven, but
satisfactory.

To describe the rest of the plot would require spoilers, so I won't
bother. Suffice to say that even the occasional predictability of this
film did not detract from my enjoyment of it.

The film uses just enough ambiguity to permit the audience to wonder
whether what they are seeing is really happening or whether it is a
product of our protagonist's subconscious mind. And then, in the end,
the film makes you question whether it matters.