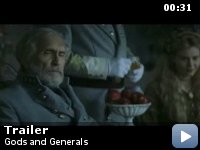 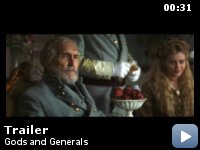 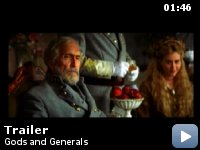 The rise and fall of legendary war hero Thomas "Stonewall" Jackson as he leads the Confederacy to great success against the Union from 1861 to 1863. Prequel to the 1993 classic "Gettysburg".

Storyline
The rise and fall of legendary war hero Thomas "Stonewall" Jackson as he leads the Confederacy to great success against the Union from 1861 to 1863. Prequel to the 1993 classic "Gettysburg".

Taglines:
The nations heart was touched by….

The exterior scenes of Burnside's winter headquarters had to be re-shot several months after filming wrapped, during the early summer; some of the fake snow was digitally added in post-production.

Irish soldier:
Is that to be General Meagher's position then?

Irish soldier:
He's takin' the privilege of an officer; defendin' the rear.

The critics are wrong

I've seen Gods and Generals twice, and I've enjoyed it both times. The
critics I've read seem to object to the piety, the length, and lack of
political correctness. It seems to have escaped them that the Civil War
was
fought in Victorian times, and that the Victorians were extremely pious
and
sentimental, not to mention hypocritical. However, this did not stop them
from efficiently making war on their enemies. The movie caught this
perfectly, with Jackson's assumption that God's will is his will — the
scene before the battle on Sunday, the contrast between his sentimental
love
of children and his 'Kill them all' about his enemies, the constant
references to Bible verses ripped out of context.
Regarding the length of the movie, all I can say is that I wasn't bored at
all, or restless, just fascinated with what was happening on screen. I'm
sure for MTV critics any movie over 90 minutes is epic.


Regarding the lack of political correctness, which in my opinion is our
modern version of hypocrisy (we can do anything we want as long as we call
it by another name) I would like to point out that this is an attempt at a
historical movie and that the Civil War was NOT fought to free the slaves,
nor were many people in the North comfortable with the concept of a
franchised Negro. And some slaves in the South were relatively well
treated
by their owners, not that they probably didn't want freedom, but they
didn't
particularly wish their masters ill. The system was set up so that
everyone
involved, slaves and masters, had something to lose by destroying the
status
quo, and that's a very difficult thing for people to do. It's easy for us
now to say 'they should have freed the slaves' but if you knew that to
free
your slaves would beggar your children, would you be able to do it?

As with Gettysburg, the battle scenes were impressive and awe-inspiring.
And they made the strategy and tactics clear to the viewer which is a
monumental achievement, not to mention showing the pure courage on both
sides, going to probably death or dismemberment without flinching. I
would
have liked more about the Northern command struggles to balance the
picture
but I can see how tempting it was to show the Southern victories to
balance
the horrible defeat at Gettysburg — and this picture is meant to be one
of
a trilogy. I can only hope that word of mouth defeats the critics and
gets
this movie the audience it deserves.