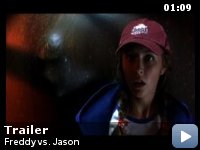 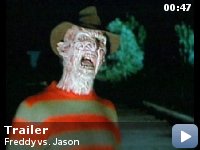 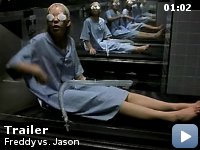 Freddy Krueger and Jason Voorhees return to terrorize the teenage population. Except this time, they're out to get each other, too.

Storyline
It's been nearly ten years since Freddy Krueger terrorized people in the dreams, and the towns folk want to keep him erased from their memory. Freddy still has one more plan on getting back to Elm Street. He resurrects Jason Voorhees and sends him off to kill. The more bodies which fall to the ground, the stronger in which Freddy becomes. This is until, Freddy realizes that Jason isn't going to step aside easily, and must be taken down himself.

Taglines:
When the son of a hundred maniacs battles an unstoppable killing machine, none will survive!

The final film in which Robert Englund plays the role of Freddy Krueger.

Revealing mistakes:
Several times during the movie Freddy's sweater lifts up to reveal either normal, unburnt skin, or a tight black undershirt. For example, when Freddy is hanging upside down from the large construction vat.

Freddy Krueger:
[narrating]
My children… from the very beginning, it was the children who gave me my power. The Springwood Slasher, that's what they called me. My reign of terror was legendary. Dozens of children would fall by my blades. Then the parents of Springwood came for me…

The Ultimate Battle Between Evil And, Um Well, Evil


Man, I felt like this was a presidential campaign. 🙂 Who would you
vote for in this awesome battle? Me? Freddy all the way, man! I'll give
you that Jason's bigger, but he's such a Mama's Boy, Freddy is just
down right mean. But this movie was so incredibly awesome and such a
treat to horror fans.

The plot, at first I had questioned how they'd do it. I mean, we got a
killer from Camp Crystal Lake and a killer who haunts your dreams. But
they made Freddy loose his powers and he needed the kids to be afraid
so he could be strong again while feeding on their fear, but how can he
do that when he's not that effective in his nightmares? Of course!
Jason! Jason is like his bubble wrap, he assumes Jason will probably go
away or he'll be easy to throw away after the job is done. But he
surprises Freddy by staying and for the ultimate battle of who's
victims are who.

This was just such a blast to watch. Classic horror cliché's and the
best battle of the ultimate boogeymen were just too cool. The ending is
a cliff hanger, but you have too many votes going towards both sides.
We could never decide who is the best at the gore… Freddy! 😀 Sorry,
I just needed to say that. But I think all horror fans will enjoy the
battle scenes and the gore. It's just a great tribute to our favorite
killers!