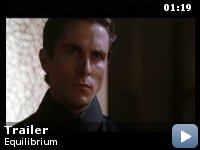 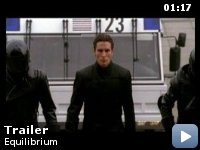 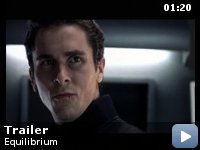 In a Fascist future where all forms of feeling are illegal, a man in charge of enforcing the law rises to overthrow the system.

Storyline
In a futuristic world, a strict regime has eliminated war by suppressing emotions: books, art and music are strictly forbidden and feeling is a crime punishable by death. Cleric John Preston (Bale) is a top ranking government agent responsible for destroying those who resist the rules. Whe he misses a dose of Prozium, a mind-altering drug that hinders emotion, Preston, who has been trained to enforce the strict laws of the new regime, suddenly becomes the only person capable of overthrowing it.

Taglines:
In a future where freedom is outlawed outlaws will become heroes.

Despite popular belief, absolutely no wires were used in the film at all. All of the gravity-defying stunts were done through conventional means. For example, the backflip off of the motorcycle was done with a trampoline.

Continuity:
The cut on Preston's lip towards the end of the movie changes size during several of the scenes.

DuPont:
In the first years of the 21st century, a third World War broke out. Those of us who survived knew mankind could never survive a fourth; that our own volatile natures could simply no longer be risked. So we have created a new arm of the law: The Grammaton Cleric, whose sole task it is to seek out and eradicate the true source of man's inhumanity to man – his ability to feel.

One of my favorite imperfect films.

I know it's stupid to believe that a futuristic society is dumb enough
to believe that the mere existence paintings, poems and sculptures can
somehow lead to WW4.

I know there's a statue as well as stylish architecture in the
headquarters of the people who ban artwork.

I know it's stupid to assume that a culture based on taking a drug
every morning is not a very secure or feasible idea.

I know it makes no sense for a culture with no emotions to still be
able to fall in love, choose a spouse and desire sex to create
children.

I know half the people that Preston attacks are just standing there
doing nothing while they wait to get their ass kicked.

I know the sets look cheap.

I know it's stupid that the "police" seem to die because their helmet
glass breaks, when they'd probably be smart enough to have
shatter-proof, if not bullet-proof plexiglass in the first place.

I know there's no reason random citizens would sit in a square to watch
a guy on a big screen giving a speech, re-enforcing what the characters
already know.

I know it paints a stupid picture of characters with emotion as looking
like long-haired Gothic slobs who do nothing but sit in rooms with
paintings and LP records and poetry books all day.

I know the emotionless characters express emotions and crack facial
expressions when they're probably not supposed to.

I know Gun-Fu doesn't make much sense as to its practicality.

Although it's a mish mash of every "man vs. futuristic oppressive
society" film ever made, it manages to pull it off as good as some of
its inspirations.

The film's story and message is clear.

The action is fresh, original, readable and gets the adrenaline
flowing.

The atmosphere is clearly defined.

The production design is inspired.

The ending is satisfying.

*More power to Wimmer and Bale! I look forward to "Ultraviolet" and
"Batman Begins".