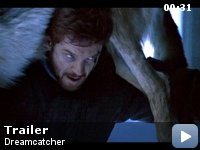 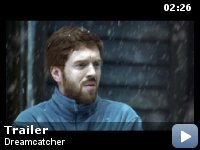 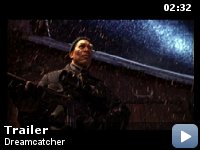 Friends on a camping trip discover that the town they're vacationing in, is being plagued in an unusual fashion by parasitic aliens from outer space.

Storyline
Four childhood friends, Jonesy, Beaver, Pete and Henry all share a special secret. Each year, they take a trip into Maine woods. This year is different. A blizzard occurs, and they recover a man found wondering around. Unbeknownst to them,this wandering individual isn't the only being to be found. Now they must act fast to stop the outbreak developing and to prevent the world from its doom

Taglines:
Four friends hung a dreamcatcher in their cabin. It's about to catch something it cannot stop.

This was the story that Stephen King wrote while he recovered from his near fatal accident. The accident is reflected in the story, especially in a graphic scene in which a major character in run down by a vehicle.

Factual errors:
The call of a loon can be heard in outdoor scenes. The film is set in winter which is when loons would have already migrated south for the winter.

Colonel Curtis:
[to Owen]
Bucko, I think we're on the same page – pissin' in the same latrine.


The Dreamcatcher novel also fell apart in its second half, but what kept
you
reading the book was the mind games going on in the lead character,
Jonesy's
(Damian Lewis) head. Jonesy's brain and body has been taken hostage by an
alien named, Mr. Gray. In the novel, Jonesy notices Gray becoming tempted
by the trappings of humanity, and uses that to his advantage. It's fun to
watch the alien craving various human indulgences, more and more, with
each
passing minute. This aspect of the novel is completely removed from the
film, leaving us with nothing more than Damian Lewis, playing both Jonesy
and Mr. Gray, making silly faces, and putting on goofy accents, as he goes
between the two characters.

The second act of the film, one taking place in a concentration camp for
American citizens whom may or may not be contaminated with an alien virus,
is nothing more than a shadow of what is shown in the book. Even the
shoddiest of cliffnote "authors" would be embarrassed to condense a novel
down to this elementary a form.

In the book, the head of the camp, Colonel Abraham Kurtz, played in the
film
by Morgan Freeman, was a nasty man, so over the edge that he was
frightening, from his first appearance to his last. In the movie, we're
made aware of the fact that he has lost it, but almost exclusively through
exposition, rather than action. Seeing these innocent civilians locked up
like animals was disturbing in the novel, and would make for an extremely
tense mid-section of this movie, if this movie dared to have any tension.

In King's Dreamcatcher, the people locked in the camps join together, with
help from the telepathic Dr. Henry Devlin, in the film played by Thomas
Jane, and start a massive uprising against the guards. At the same time,
Devlin is working on Colonel Kurtz's more conscientious subordinates, both
through words, and the power that he, along with Jonesy, Beaver and Pete,
was given by a mysterious fifth friend, Duddits. In the movie, the
uprising
never occurs, and it feels as though each of the concentration camp scenes
were put into the film to pad it out, while giving a plum role to Morgan
Freeman.

I won't give away the finale to either the novel or the film, but I will
say
that everything good about the finish of the book form of Dreamcatcher, is
noticeably missing from the film version. Instead of an emotionally
moving
climax, we get a sloppy CGI-fest that reminded me a bit of Godzilla VS.
King
Kong, or maybe even Species 2. Although I found myself squirming over the
laziness displayed during the majority of the second half of the picture,
I
was still undecided as to whether or not I would recommend it. The lousy
last few minutes of film made up my mind.

This is the first movie I can think of that I can only recommend in
patches.
Drink a couple of gallons of water before you attend the picture, and run
to the bathroom to let it out, whenever things start getting stupid.

If you're a fan of horror, you will enjoy the first hour of the film. The
bathroom sequence is a near-masterpiece, and, for that alone, Lawrence
Kasdan should be commended. Kasdan also handles the flashback scenes,
featuring the four main characters as children, adequately enough to get
my
thumb working its way toward the "up" direction. Finally, during those
few
times Kasdan does take us into Jonesy's brain, he does so in an incredibly
interesting, oftentimes humorous, manner.

When Jonesy leaves the relative safety of the locked room he has nuzzled
deep within his cerebrum, only to find the evil that is hiding behind
boxes
of stored memories inside his mind's warehouse, it genuinely gave me
chills.
More scary moments like this, placed throughout the film, and Kasdan may
have had his first instant classic in a long while.

There was a lot of money and time put into Dreamcatcher, and it shows on
the
screen. Steve Johnson's work on the puppet versions of the "s***weasels"
is
extremely effective, and shows, once again, that anything CG can do, human
hands can do better. The CG isn't the best I've seen, but it's
significantly less cartoony than either of the last two Star Wars
prequels,
and does the job nicely, even though I would have enjoyed the effects far
more, if CG wasn't a part of them. The cinematography by John Seale (The
English Patient, The Talented Mr. Ripley, Witness) is gorgeous, but not
noteworthy enough to make the Director of Photography the star of the
film,
like Caleb Deschanel's work did for him in the recent semi-stinker, The
Hunted.

What we end up with is a nice looking film that feels hollow.