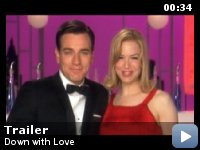 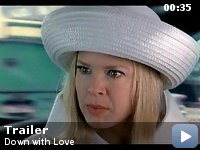 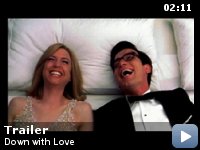 Aaaah… it's New York City in 1962, and love is blooming between a journalist and a feminist advice author, who's falling head over heels despite her beau's playboy lifestyle.

Storyline
An homage to the early 1960s sex comedies that starred Rock Hudson and Doris Day. The story follows a best-selling female advice author who has all the answers until a sly journalist playboy starts asking the questions.

Taglines:
The ultimate catch has met his match.

Everything the characters wore, literally from head to feet, was custom-made for them.

Anachronisms:
When Barbara arrives in NY and encounters the bomb protesters in front of what appears to be the United Nations plaza, there is a prominent shot of the People's Republic of China (PRC) national flag on one of the flagpoles. PRC did not take over the UN's China seat from the Republic of China (Taiwan) until 1971; thus, in the early '60s, the Taiwanese flag would have been displayed.

Narrator:
The place: New York City. The time: Now, 1962. And there's no time or place like it. If you've got a dream, this is the place to make that dream come true. That's why the soaring population of hopeful dreamers has just reached eight million people. Oh! Make that eight million and one.

Not for the casual moviegoer

It's 1962 New York. Barbara Novak (Renee Zellweger) has written a book
called "Down With Love" convincing woman that they don't need a man or
love
or sex to succeed and be happy with themselves. Womanizer Catcher Block
(Ewan McGregor) is determined to prove her wrong.

This is many things–an affectionate remake of those silly Doris Day/Rock
Hudson movies; a sweet sendup of them at the same time; a perfect example
of
1960s sex comedies with a 2000s twist; a huge barrel of laughs for film
buffs with its perfect remake of a 1960s film and an examination of sexual
mores and stereotypes of the 1960s.

The movie look like a Day/Hudson movie right down to the fashions
Zellweger
wears, the VERY colorful sets, the obviously painted backdrops from
penthouse apartments and the crappy back projection in cars. There's also
a
hysterical (and very dirty) use of split screen during a phone
conversation
between Zellweger and McGregor. The movie even opens with the old
Cinemascope logo used in films of that era!

The cast is right on target–Zellweger and McGregor give their all to the
performances–they wink at the audience all the time…but not TOO much.
David Hyde Pierce (doing Tony Randall) and Sarah Paulson are also very
funny
with the dreaded best friends role. The only real problem is the script.
It is sharp and funny bit occasionally bogs down and some of the twists
are
too obvious.

Still, I enjoyed it. The casual moviegoer will probably hate this–unless
you get the inside jokes all throughout the film you'll think you're
watching a badly dated sex comedy. But it's not–it's a parody and an
affectionate sendup. This will be most appreciated by film buffs or
students.