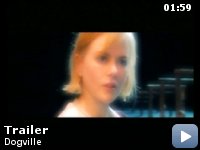 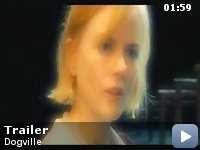 A woman on the run from the mob is reluctantly accepted in a small Colorado town. In exchange, she agrees to work for them. As a search visits town, she finds out that their support has a price. Yet her dangerous secret is never far away…

Storyline
Late one night, a beautiful and well-dressed young woman, Grace, arrives in the mountainous old mining town of Dogville as a fugitive; following the sound of gunshots in the distance which have been heard by Tom, the self-appointed moral spokesman for the town. Persuaded by Tom, the town agree to hide Grace, and in return she freely helps the locals. However, when the Sheriff from a neighbouring town posts a Missing notice, advertising a reward for revealing her whereabouts, the townsfolk require a better deal from Grace, in return for their silence; and when the Sheriff returns some weeks later with a Wanted poster, even though the citizens know her to be innocent of the false charges against her, the town's sense of goodness takes a sinister turn and the price of Grace's freedom becomes a workload and treatment akin to that of a slave. But Grace has a deadly secret that the townsfolk will eventually encounter.

The Man with the Big Hat

Taglines:
A quiet little town not far from here.

Katrin Cartlidge was chosen to play Vera, but she had to leave the shooting because of her health problems.

Incorrectly regarded as goofs:
Many continuity issues (hats on/off in alternating shots etc) are entirely deliberate. There are a large number of quick cuts throughout the film which serve to disorientate and confuse the viewer. The continuity in these cases is never precise and is as much a part of the final film as the script.

Narrator:
This is the sad tale of the township of Dogville. Dogville was in the Rocky Mountains in the US of A, up here where the road came to its definitive end, near the entrance to the old abandoned silver mine. The residents of Dogville were good honest folks…

One of the bravest observations on the truth of humanity


I started watching Dogsville and felt like turning it off.. after all,
what kind of movie could occur with no scenery? No doors.. it seemed
like some sort of play/movie hybrid but after a shortwhile all those
things faded away until I realized how much I would have missed if I
had turned it off – it is now one of my favourite movies of all time.


Why? It is so brave to criticse humanity like this and admit just how
'dark' a race we truly are – not matter how much each of us profess to
being 'good', we all know that most of us are anything but. Through
this movie you see a woman who learns the cold harsh truth in a place
where she expected to find the goodness that her faith told her
existed. And then on not finding it, discovered that even within her
lay a wrath that echoed the darkness that she herself wished did not
feature so dominant in our race. And the biggest test of this is to
observe your own emotions throughout this movie until what you feel at
the end as perfect evidence…

I honestly believe those people that don't believe what this movie is
expressing needs to take a cold hard look around them. And if they
still don't believe, they are just like the people in this movie –
unwilling to see the truth and coming up with excuses and reasons when
nothing justifies the horrible world we live in.

A true masterpiece – one of the few pure pieces of art in cinema with
amazing acting from Nicole Kidman especially, and the lack of a set
causes you to be immersed in the characters like no other movie. And
its 'them' and human nature that is the focus. Will leave you thinking
and astounded (unless you don't like to think and can't watch a movie
that isn't afraid to do something unique, in which case there a
countless movies for 'you').

TagsSweden
Down with Love
Manic