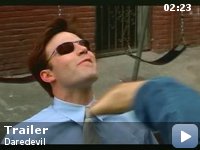 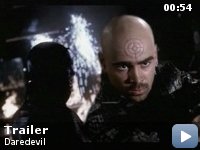 A man blinded by toxic waste which also enhanced his remaining senses fights crime as an acrobatic martial arts superhero.

Storyline
Fate deals young orphan Matt Murdock a strange hand when he is doused with hazardous waste. The accident leaves Matt blind but also gives him a heightened "radar sense" that allows him to "see" far better than any man. Years later Murdock has grown into a man and becomes a respected criminal attorney. But after he's done his "day job" Matt takes on a secret identity as "The Man Without Fear," Daredevil, the masked avenger that patrols the neighborhood of Hell's Kitchen and New York City to combat the injustice that he cannot tackle in the courtroom.

Cameo:
[Stan Lee]
An elderly blind man that a young Matt Murdock stops from walking in the streets by holding out his walking stick in front of him. Lee's character is based around the elderly blind man from the comics which Matt saved, but also resulted in the accident that gave him his powers.

Revealing mistakes:
During the battle in the church, Daredevil and Bullseye dangle from a horizontal organ pipe. Such an organ pipe is very carefully balanced in the vertical position secured by only one small hook mounted on a wall bracket. Should that hook come undone, the organ pipe would fall to the ground immediately.

Daredevil:
[from the Director's Cut]
Quesada! Time to give the Devil his due!

Forget the theatrical version, buy the director's cut DVD instead!


The DC is 30 minutes longer than the original cut, of which the new
footage ranges from a whole new big subplot, and little things, that
actually have more impact and and make the movie more understandable
and better than you might imagine. The action scenes are way better
also. The DC makes the movie into what it should've been in the first
place before the studio screwed with it. I can't believe how much the
studio hacked this movie up for theater..it is quite ridiculous. But
now with the movie restored to it's original vision, i can fully enjoy
it without the thought of something missing from it. In comparison, the
only thing that the original DVD release has over this new DC DVD is it
has a second bonus features/behind the scenes disc.

The DC DVD is one disc, and has a few movie trailers, a making-of
featurette, and an all new audio commentary. Despite it's shortcomings
in form of a second disc compared to it's counterpart, i'd choose the
DC over the theatrical version any day. The DC is simply so much
better. Forget what you know about the theatrical cut of the movie, and
give this new DC version a chance..it is superior to the other version
in every way. So give it a try, and i think you might be pleasantly
surprised. Even those of you who hate the original cut.

In closing, i'd like to thank the Director, the film editors, and
everyone else who made this wonderful Director's cut DVD possible. I
love the new version, and it's nice to see the Director's vision
restored to this movie after nearly 1 1/2 years. Two thumbs up! R.I.P.
Daredevil theatrical version!!