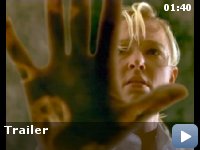 Storyline
Eight strangers find themselves waking up in a strange cube-shaped room with no recollection of how they came to be there. Soon discovering that they're in a strange fourth dimension where our laws of physics don't apply, they have to unravel the secrets of the "hypercube" in order to survive…

Taglines:
Welcome to a new dimension in fear

While the characters are recalling the last things they remember before being in the Cube, Geraint Wyn Davies' character, Simon, states he was in New Haven. When the screen divides into different views, the shot on the right/upper right of the screen is an alternate take from another Lions Gate film Davies had a role in, _American Psycho II: All American Girl (2002)_. The similar shot in American Psycho II can be seen shortly after 1 hour 6 minutes into that film.

Continuity:
When Mrs. Paley discovers the dead scientist in the other room, she sees him lying on the floor. But when Jerry enters the room he says that there is a gravity-shift (which would have made the dead scientist look like he was lying up against the wall). They disorient the viewer by shooting the 'dead scientist'-scene sideways, but gravity is still in the same direction as in the previous room.

Colonel Thomas H. Maguire:
[Maguire opens the portal to a new room, but ignores the room to look at the sides of the portal]
Numbers. Where's the goddamn numbers?
[the portal closes before he can decide what to do]

Colonel Thomas H. Maguire:
Oh God, oh God. There has to be something.
[He opens the briefcase, but it does not hold whatever he was looking for]

Colonel Thomas H. Maguire:
Oh, goddamn it! I mean, they're my numbers! Don't I at least get a shot at my numbers, you stupid fucks? I want a chance! God. I want a chance, like everyone else!

I've never really thought about it this way, but I suppose in most cases,
it's an honor to have a sequel. Although no one liked the sequel, I'm sure
Jonathon Lynn is proud that The Whole Nine Yards got a sequel somehow. And
that seems like the case with Cube 2: Hypercube, a sequel to the cult hit
Cube. But then one wonders how there can be a sequel to a movie that was
basically all filmed in one 14x14x14 set? Well, Cube 2 is the answer-but not
really the best one. It shows what Cube would have been if it had had a
bigger budget, but it also showed what it didn't want to
become.


Strangers are thrown together into a series of interconnecting cubes yet
again, but this time they're more high-tech. They're not different colors,
and there's no booby traps. Instead, some rooms have a cube that attacks you
(don't ask), some have gravity reversed, and time means nothing. There seems
to be no pattern, like in the first one, so how are these people supposed to
get out?

This is all one big rehash of the first. There's the wandering around,
talking about the past, and speculation of why they're in the cube. I guess
that's for people who see sequels before the originals. The characters are
all more broadly drawn, the dialogue is cheesier, and it looks faker. In the
first, you barely knew anything about the giant cube they were in. Here, it
seems like everyone was involved somehow. The ending, which was vague in the
first, explained some more, which I was angry yet happy about. It's hard to
explain. But then they left it in the air yet again. Maybe it's for the
prequel, Cube Zero (due out sometime this year) to describe.

But one positive difference between the two is that this one seemed to be
overall scarier. It's not claustrophobia, but the idea of anything happening
in a hypercube. Because they don't exist, everything goes wild here,
allowing for some things to happen. It's all quite creepy. And although the
random crazy psycho killer is more random here than the first, I liked him
more, and he was great as he was going through the hypercube. Cube was an
original, interesting, and disorienting movie. Cube 2 is the exact same
thing, except not as good.

Rated R for language, some violence and brief nudity.