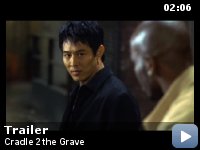 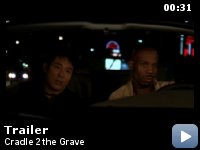 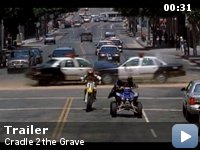 A jewel thief's daughter is kidnapped after he steals a collection of prized black diamonds, which aren't at all what they seem.

Storyline
When his daughter is kidnapped and held in exchange for priceless diamonds, the leader of a crew of highly skilled urban thieves (DMX) forges an unlikely alliance with a Taiwanese Intelligence officer (Jet Li) to rescue her. Their race against the clock to find the precious stones ultimately unravels a plot to distribute a deadly new weapon of war.

The casting of Mark Dacascos was the result of a poll on Jet Li's website where fans were asked who they would like to see him fight next.

Fight Announcer:
Put me down now, or I'll kick your ass, Bruce!

Su:
I'm *not* Bruce.
[throws the short man through the air]

Expect This Cradle Not 2 Rock

Joel Silver and Andrzej Bartkowiak once again brings us another Rap
Star/Martial Artist collaboration movie in which I like to call, "Hip-Hop
Chopsocky" Flicks. I enjoyed both Romeo Must Die and Exit Wounds, however
I'm getting the feeling that Silver and Bartkowiak are using a Xerox copy
machine to develop the next action flick. Expect everything you saw in
the
first two films to appear in Cradle 2 The Grave.


Yes, expect all the action sequences to drown the whole plot of the film.
Yes, expect DMX to have his hip-hop soundtrack blasting in most of the
action scene. Yes, expect the two protaganist of the story to reluctantly
get along with each other and then later on to share a common bond at the
end of the movie. Yes, expect Jet Li to have the same facial expression
throughout the whole film and no more than 10 lines in the movie. Yes,
expect the same fat black guy from Kangaroo Jack to be back as the black
comic element. Yes, expect Tom Arnold, a guy who was once married to a
woman
who looked like Kangaroo Jack, to be back as other white comic element of
the film. Yes, expect a night club scene and every prop seen in a Hype
William music video (i.e. Jacuzzi, champagne, and big booty bitches.)
Yes,
expect the Rap Star actor do some martial arts of his own. (And I'd like
to
say to DMX, "Yo dog, stick to rappin', cuz the karate thang ain't you.
You
got those thin wires making you look good.") And yes, expect Jet Li to
fight
with his counterpart nemesis, in a ring of fire at the end of the movie.
Where the hell is Johnny Cash when you need him!

And as for Jet Li, I do respect him as a martial artist but since he's
been
making movies in US, his skill have been more half-assed compared to what
he
did in his Hong Kong Flicks. The scene where Jet fights in a cage match
was
the only highlight of the film. However, only to be distracted with DMX's
action sequences, with camera going from one scene to the other. For me,
I'd
rather see Jet Li do his stuff than to see DMX being pursued by cops. I
live
near Oakland and I see that sh*t almost every day.

Overall, I would suggest to save your money and watch Romeo Must Die and
Exit Wounds at the same time. Or if you don't care what I say…Hell, go
spend the $9.00! But remember "the Cradle" is robbing you!