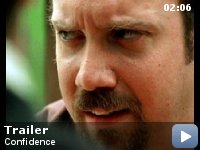 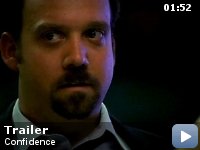 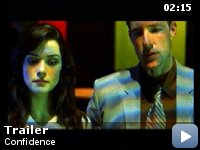 Jake Vig (Burns) is a consummate grifter about to pull his biggest con yet, one set to avenge his friend's murder. But his last scam backfired, leaving him indebted to a mob boss (Hoffman) and his enforcer.

Storyline
What Jake Vig doesn't know just might get him killed. A sharp and polished grifter, Jake has just swindled thousands of dollars from the unsuspecting Lionel Dolby with the help of his crew: Insideman Gordo, Shills Miles, and Big Al–and two corrupt LAPD officers, Lloyd Whitworth and Omar Manzano. But when both Lionel and Big Al turn up dead, it becomes clear that Lionel wasn't just any mark–as Jake soon learns, he was an accountant for eccentric crime boss Winston King. Never one to shy away from a challenge, Jake offers to repay The King by pulling off the biggest con of his career. The mark? Morgan Price, a banker with deep ties to organized crime. With so much riding on the outcome, Jake decides to bring in a brash, blonde pickpocket named Lily, who joins the crew in a complex scheme involving corporate loans, creative accounting, wire transfers and off-shore accounts. Jake…

Continuity:
The position of Jake Vig and Lily during their second meeting (closeup) outside the club.


There's this rule in Hollywood that may be unwritten but is nonetheless
ironclad: stick to the formula. The hero can't die in a romantic
comedy. The drama can't be too funny, and the comedy can't be too sad.
Action flicks can't be too deep, and "serious" movies have to be
somewhat boring.


On the rare occasions when some movie comes along that breaks these
rules, we usually get cinematic excellence. But with Confidence, don't
be expecting any deviation from the format. Confidence is a fun,
enjoyable, light caper movie. It doesn't pretend to be anything else.
And for what it is, it's not half bad.

Edward Burns plays a con man, Jake Vig. Together with his crew of
seasoned, confident fellow con men, he scams people out of money. Lots
of money. And of course, sooner or later he's bound to pick the wrong
person to scam. In this case it's a seemingly innocuous accountant who
just happens to work for a mob kingpin, cheesily called "the King" (but
played brilliantly by Dustin Hoffman). In a tight spot, Jake agrees to
do a con and split the proceeds with the King, to get him off his back.
What follows is the usual series of crosses, double-crosses, and
triple-crosses while everyone tries to figure out who to trust and
who's about to screw who over.

When I say that Confidence follows the rules, I mean it. Crime capers
must have wise-talking characters. This does. Crime capers must be
stylish. This is. Crime capers must have the token female, whose role
is to be sexy but not too sexy. Rachel Weisz fills the part here, and
does a decent job at it. (Other such token women included Julia Roberts
in Ocean's Eleven, and Angela Bassett in The Score). Crime capers must
make the audience scratch their heads trying to piece it all together,
but must not make them think about any deeper moral issues of right and
wrong. Again, Confidence lives up to that deal on both counts.

Still, it was fun escapist entertainment. And, without giving away too
much of the ending, let's just say that I'm always impressed with a
movie that manages to surprise me. That alone makes it worth seeing.