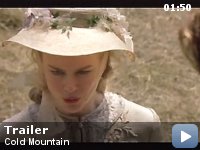 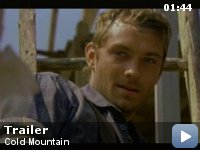 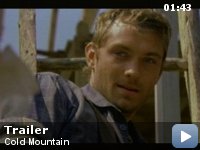 In the waning days of the American Civil War, a wounded soldier embarks on a perilous journey back home to Cold Mountain, North Carolina to reunite with his sweetheart.

Storyline
Inman, a wounded confederate soldier, is on a perilous journey home to his mountain community, hoping to reunite with his prewar sweetheart, Ada.

Taglines:
If hate sends men to war, then it must be love that brings them home. ( Moviepix Canada)

Julia Roberts and Cate Blanchett were both considered for the role of Ada.

Ada:
[voiceover]
Dear Mr. Inman, I began by counting the days, then the months. I don't count on anything anymore except the hope that you will return, and the silent fear that in the years since we saw each other, this war, this awful war, will have changed us both beyond all reckoning.

It's the lasting effects of war on the idividuals…

Anthony Mingheller's astounding film cleverly sweeps the audience into
the
horrors of war at its beginning. He then introduces his two principle
characters who would gradually move the audience into their world wrought
by
war and hardship. We watch as the characters begin to unravel their
internal
tortures and their need to subdue their isolation to face their regrets
and
hope for the future. This is an absolutely fabulous movie that portrays
the
stunning performances of its stellar cast of actors and the overwhelming
raw
landscapes that are kept in sync with their events and moods. Observe
the
stages of emotional changes in the characters. So amazingly and
magnificently captured at different camera angles, from scene to scene
against the cold, mountainous countryside!


This film isn't throwing off longwinded dialogue and lengthy physical
encounters between Jude Law's Inman and Nicole Kidman's Ada to reveal the
meeting of two souls searching for a meaningful existence. Yep, it's
that
brief and silent stare of Inman as he confronts the graciously low-keyed,
prim and proper Ada that explicitly puts their sensory awareness of each
other so powerfully on screen. As the events flow, I was completely
mesmerized by the Inman character watching him transcend to his sense of
isolation and his developing disillusion with his world. On the other
hand,
I couldn't take my eyes off the immaculately well-bred and gorgeous Ada
as
she succumbs into a scrawny hapless damsel in complete distress. It's
fascinating to watch the couple adapt to situations beyond their control
and
to study the emotional and behavioral attitudes of two human beings
altering
at such opposing magnitude as a result of one war. Observe how the once
popular Inman slips into desolation in the battlefield, becoming even
more
tormented from his world as he meets up with some very strange
characters.
Will he ever find solace with these characters, or with Ada at the end?
Will Ada, while feeling alienated from her new abode, at the beginning of
the film and with the death of her father, be able to battle her
insecurity
to become spiritually enlightened and physically capable with the help of
her new acquaintances? Is she able to embraces what the farmland has to
offer her? And will Inman be capable of escaping what the gruesome
battlefield has come to mean to him? This film lays out an enormous
ground
for the examination of the effects a war on different individuals.

The film continues to remind the audience that Ada and Inman are bound
together by their haunting memories of one another. That, indeed, is
beautifully captured by the expressions on Law and Kidman's faces. The
symbolisms, throughout the film, are plentiful and brilliantly ascribed,
allowing the audience to join the dots to the destinies of the couple.
Even
crows, clearly suggesting doom and destruction, never fail to demonstrate
the dark instincts that trouble a man's soul. And those women Inman meets
in
his journey seem to trigger the expectation of the audience to see him
drawing closer to the woman he loves and to home. Even these characters,
encountered by Inman, provide a picture of how different people react to
the
war. But will war ultimately bring peace and safety to its protagonists?
This film is a masterpiece that will provide much food for thought.

Renee Zwellweger is phenomenal in her boisterously loud 'Ruby' role. She
brings another aspect of the American woman that's so different in
breeding
from Kidman's Ada. Both are educated in their different cultural way of
life. What can Ada learn from Ruby, the frontier woman who sees the
'hands
and knees' toiling as the only way of survival in her community?
Zwellweger
provides the comic relief that's much needed for this powerfully intense
film. She's superb in her role as the beacon of strength and hope for
injecting a meaningful existence of living. Unlike the soldiers or the
hypocritical Home Guard authorities that use guns to destroy their
enemies,
Ruby uses her hands-on skills to beat the odds of survival. It's
uncannily
delightful to watch her interacting with Kidman's character. She, Law and
Kidman are definitely worthy of being recipients of the Oscar statuettes.
They exhibit their superb non-stop performing talents in this film with
their onscreen appearances. The Q&A session with Brendon Gleeson (who
plays
Ruby's father), has prompted me to want to go see this movie again – to
watch closely how the strength of the film's womenfolk can make a
difference
to the human beings' survival instincts. I want to study again how
hellish
wars are for destroying and crippling, not only the physical, but the
mental
aspects of the masculine race. And Gleeson does drive home an
interesting
question: When these mountain folks `volunteer' to fight a war, how come
they should be penalized as deserters if they were to decide to opt out
of
it?

This film is a MUST-SEE. It's beautifully crafted, assembled, and
absolutely
mesmerizing in all aspects of filmmaking techniques and style. The music
score and soundtracks are so appropriate locked into the events and the
moods of the characters. And the film's title? It does project its
allegorical appeal.