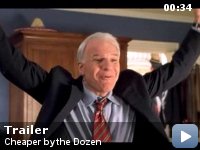 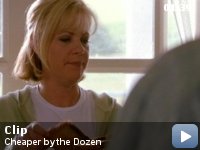 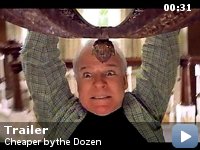 With his wife doing a book tour, a father of twelve must handle a new job and his unstable brood.

Storyline
The Bakers, a family of 12, move from small-town Illinois to the big city after Tom Baker gets his dream job to coach his alma mater's football team. Meanwhile, his wife also gets her dream of getting her book published. While she's away promoting the book, Tom has a hard time keeping the house in order while at the same time coaching his football team, as the once happy family starts falling apart.

Taglines:
This Christmas The More… The Scarier!

At the beginning of the movie, Kate reveals the title of her new book to be "Cheaper By The Dozen". Although this movie is loosely based on a book by that title about a real-life family, the book was written by one of the sons, Frank B. Gilbreth Jr., along with his sister, Ernestine Gilbreth Carey. Although this film is based on that same book that inspired the 1950 film (
Cheaper by the Dozen), the only element it retains from the original is the idea of there being 12 children in one family. Even the names of the characters are changed.

Continuity:
When Kate tells Kyle and Nigel they have a dentist appointment during the breakfast scene, the twins start making strange sounds at Tom. While they are doing this, Charlie moves from the stove to the bench behind the twins. When it cuts to a close-up of Kyle and Nigel, Charlie has instantly vanished, and is back standing at the stove next to Tom.

Hank:
[with passion]
Every once in a while, I carve a pumpkin with a knife made of lollipop sticks…

Nora:
[talking on the phone]
It totally sucks!

Deeply Flawed – The message seems to be: "Give up; accept second best"

I have resisted watching this film for a long time; I remember cringing
when watching Steve Martin in the remake of 'Father of the Bride' and
did not wish to see an actor, I enjoy, suffering so again. Well this
also was not a patch on the original, but that said there was nothing
wrong with Steve Martin's performance; he does well with the material
as indeed do all the performers. In fact this is well directed, and a
fine film technically: it is just that the script is unbelievably awful
(warning there may be slight spoilers):-

This is a film about family values, yet it has been written by people
who clearly don't understand family values. There is no family spirit;
no feeling that, with the exception of the parents, any of the family
members cares about anyone but themselves. Of course children can be
selfish; of course families have off-days; but at the end of it all
they pull together, that's what it means to be part of a family. This
family didn't pull together; it was self destructive to an absurd
degree. I come from a big family I have a big family and one thing I
know, as does anyone who is or has been part of a big family, is that
big families need discipline. When you have more children than you have
hands, you have to know that your children will do what they are told
when it matters: this is fundamental it is simple survival. The major
calamities, the scenes of complete mayhem, these at least rang true,
but where was the aftermath: the parents seemed to accept it as there
lot to be the butt of their children's nasty pranks. I don't mean to be
overtly moral, but for this film to have worked it needed to have a
moral backbone, there needed to be a demonstrable upside to helping
each other and a realisation that when hurt was done, that this was
bad: unfortunately this was missing even to the point that we, the
audience, were meant to think it funny that one of the children was
nicknamed Fed Ex to signify that he did not fit in. The first time it
was sort of funny, but when it kept happening and was not challenged it
became unpleasant. At least here there was a consequence, but there was
no acceptance of guilt on the part of the main perpetrator and there
was no evident remorse.

If you watch this film, I am sure there are odd moments of high comedy
that will appeal, but, unfortunately, that is probably all. There is no
pathos, no feel-good emotional payoff. The ending is deeply
disappointing. The parents give up. All they needed was for the
children to help for two weeks, but that was too much for this loveless
family, so the parents give up their dreams, and accept the easy
course. What sort of lesson is this? If threatened with difficulty, if
the right thing to do is too hard – Give up! This film does not have a
nice message. I find it deeply worrying that there are so many
favourable reviews. On reading some of these I am relieved to find that
their authors, clearly, took other things from this film; who knows,
they may be right, perhaps I have misinterpreted the content. There are
others, however, who seem to have read the same message as I, but see
no wrong in it: this I find disturbing!