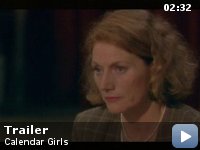 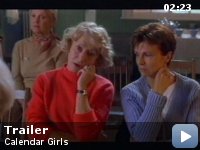 A Women's Institute chapter's fundraising effort for a local hospital by posing nude for a calendar becomes a media sensation.

Storyline
Middle aged Chris Harper and Annie Clarke are best friends. They spend much of their time at their local Knapely, Yorkshire County chapter of the Women's Institute (WI), whose motto is "enlightenment, fun and friendship". Although they like most of the women at the WI (the friendship part), they, but the perceived flaky Chris in particular, hold the way Marie, the local president, runs the chapter with derision. They find much of what goes on there, especially the monthly presentations, banal and devoid of enlightenment and fun. Equally as banal was last year's fund-raising calendar, featuring local bridges, which raised a meager £75.60, with this year's proposed calendar, local churches, promising to be even more so. After Annie's husband John passes away from leukemia, Chris wants the WI to provide a memorial in his memory: a new sofa for the family room at the hospital…

Taglines:
Drop everything this holiday season.

Contrary to the depiction in the film, the proposal for the calendar enjoyed broad support in the Women's Institute organisation.

Continuity:
When leaving the hotel for the first time before they get into the limo to go to sign autographs, one of the women takes a camera from the photographer and then, between shots, the camera changes from right hand to left and the right again.

Annie:
Anybody fancy some chips?

I've been getting a little tired of the computer-enhanced extravaganzas that
have been flung at viewers over the past few years. You know what I'm
talking about–the movies that are short on plot, acting or both which are
bolstered up by loud FX and revolutionary digital animation so that it
becomes "special effects in search of a picture". I'm delighted to say that
CALENDAR GIRLS has nothing of the kind. It's all about the plot, all about
the women involved, and all about laughing so hard you cry–or maybe about
being able to forget tears in deep laughter, if only for a
moment.


The acting is superb. One hardly needs to mention Helen Mirren. I read one
comment that pans her Yorkshire accent; well, I attended it with an
Englishwoman who is very familiar with such an accent and she specifically
told me that her accent never slipped, so I've no idea where that comment
came from.

Having been involved with the world of cancer treatment recently
(fortunately with a happier outcome for my mother, a survivor of breast
cancer) this movie strikes close to home. It's completely accurate; it's
not pretty and it's often degrading, no matter how much the oncological
staff tries to make it easier. The movie is also accurate in the kind of
sentiments it expresses about cancer. People who have been touched by that
filthy disease will do ANYTHING to fight it. (I sat on a spin bike for
twenty-four consecutive hours in aid of breast cancer less than two weeks
ago, so I do know what I'm talking about.) Yes, a few liberties with the
real story have been taken. So what? The result is a coherent progression
that is more interested in human beings than plot details. And isn't that
what it should be about?

I've heard this dismissed as a movie for "older people". I'm proud to be of
that number–after all, at the age of thirty-five I'm ten years out of the
target demographic at which Hollywood films are aimed. If by "older people"
they mean people who want a movie to be about something important as opposed
to the latest spectacular light show, I'm glad to be of that number. I'd
recommend this to anyone who's interested in a movie that is both
hysterically funny and deeply touching. It has re-inspired me in the battle
against cancer, and if it does that to anyone else, it will have made a
worthwhile difference.