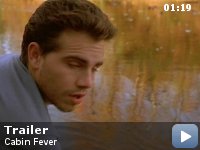 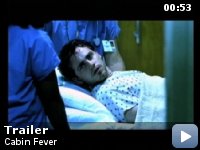 A group of five college graduates rent a cabin in the woods and begin to fall victim to a horrifying flesh-eating virus, which attracts the unwanted attention of the homicidal locals.

Storyline
An offbeat horror tale about a group of five college friends on vacation at a remote mountain cabin when one contracts a flesh-eating virus. As it spreads among the friends, their true feelings and personalities emerge as they struggle to survive the virus and each other.

Taglines:
Terror… In the flesh.

Peter Jackson stopped production on
The Lord of the Rings: The Return of the King three times to screen this movie for the entire crew. Jackson was so enthusiastic about the film he gave director Eli Roth publicity quotes.

Continuity:
When Marcy first jumps up in the bath after shaving her flesh off, there is clearly still a fair amount of shaving cream on her legs. But a split second later, in the close-up of her bleeding legs there is no trace of shaving cream to be seen.

I Honestly think the Hype Killed this Film.


Before Cabin Fever came out.. the word in the horror world was that
Cabin Fever is one of the most gruesome, bloodiest, scariest, funniest,
craziest horror movie ever. So when it opened in theaters, everyone's
expectation was sky high ..even mine. Yes, I was kind of disappointed
with Cabin Fever because it was hyped so much. I mean you had Peter
Jackson the director of Lord of the Rings saying in the trailer this is
one of best horror movie he's ever seen. Now if I did not go in with
such huge expectations, I could had enjoyed it for what it was. I
really started enjoying Cabin Fever once it started playing on cable.
Every time it comes on I watch it and I begin to love this film a lot
more.


Cabin Fever is directed by up and comer Eli Roth. He's a guy that loves
horror films and mentioned in several articles this movie pay homage to
his favorites like Evil Dead.

Cabin Fever is about 5 college kids who had just finish test finals and
are enjoying some relaxation and fun in a cabin in the woods but the
fun is cut short when they learn a flesh eating bacteria disease is
around. The main character Paul is played by Boy Meets World actor
Rider Strong. Rider was surprisingly good in this movie and Paul is the
character you root for the most to not get the disease.

The movie is funny. The funniest movie ever? Hell no! This movie is
scary. The scariest movie ever? Hell no! This movie is bloody. The
bloodiest? Hell no! So I'm finally enjoying the movie for what it's
worth and it is and has a potential to end up being a horror movie
classic. There are tons of films that people hated when it first came
out and then come to love it semi years later. Cabin Fever I believe is
one of them.