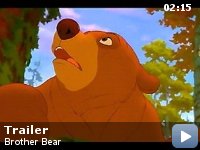 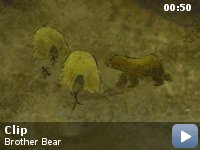 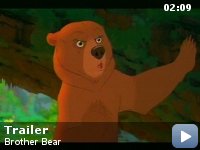 When a young Inuit hunter needlessly kills a bear, he is magically changed into a bear himself as punishment with a talkative cub being his only guide to changing back.

Storyline
Kenai, a man who resents bears after a fight with one kills his older brother, is turned into a bear so he can see life from a different perspective. He is visited by the spirit of his older brother, and is told that, if he wishes to be changed back into a human, he must travel to the place where the lights touch the Earth, in other words, the Northern Lights. Fueled by hope, Kenai sets off on his long journey, and, along the way, encounters a younger bear, Koda, who is a chatterbox and a fun-loving spirit; Koda is trying to find his way back to his home, the Salmon Run, which, coincidentally, is right next to where the lights touch the Earth. Koda and Kenai team up, but are hunted by Kenai's other brother, Denahi, who fears that the a bear has killed Kenai as well. Along the way, the two bears meet other friends, including too moose, some rams, and some mammoths, with who they hitch a ride…

Taglines:
The Moose Are Loose!

The painterly background styling is inspired by the landscapes of Albert Bierstadt. Then-Disney CEO Michael Eisner, a collector of Bierstadt's work, lent the animators some of his own paintings to study.

Miscellaneous:
In the closed-captions on the DVD, the narrator at the beginning and end of the film is ID'd as the character Sitka. The voice is Harold Gould and the character is actually Old Denahi.

Denahi as an Old Man:
This is a story from long ago, when the great mammoths still roamed our lands. It's the story of my two brothers and me. When the three of us were young, we were taught that the world is full of magic. The source of this magic is the ever-changing lights that dance across the sky…

A perfect storm of artwork, story telling, and music guaranteed to rock your emotional boat.

First, I want to congratulate the creative team that developed and
produced Brother Bear, which is truly an audio-visual masterpiece. The
use of a classic story formula to tell a deeper more meaningful story
within a story is nothing short of amazing. This feature is a perfect
storm of artwork, story telling, and music guaranteed to rock your
emotional boat.


Second, be patient! This feature requires several viewings to
understand and to catch the symmetry and depth of the story within the
story. Also you must watch the wide screen version, which is the best
way to understand this feature's sub-story. The surface story is for
the kids, the real story is for adults of all ages, however, I would
preview first before showing to the extremely young or insecure as
there are some dark themes presented here. So prepare yourself first,
as this feature should spark some good family discussions.

If you take this feature at face value, you get a classic coming of age
story touching on just about every major theme in literature. One can
also make a case for when the Inuit's first bonded with the animal
world as the alternate story, both of which are well told, however some
folks might consider it repetitive or boring. Unfortunately, these
folks missed the whole point of the feature.

The secret and beauty of this feature is to look beyond the classic
Disney story and focus on the sub-text being used and you'll discover a
deeper more inspiring story framed within the classic Disney formula.
In other words don't take this feature at face value. To understand the
sub-story, you need to pay attention to the use of metaphors as well as
the clues within the songs. That's right, the songs are strongly tied
to the sub-story. To start off with, the title song 'Great Spirits',
tells us 'In a world that's not always as it seems'. This is a hint
that this story is not what is seems as the Inuit's, Bears, Mammoths,
Moose, and Rams are really metaphors for other things. Heck, even Rutt
and Tuke's "I Spy" game had nothing to do with what they were
describing. Uncover the metaphor of the mammoths and you'll discover
the real story of Brother Bear. Once you do, you'll find that there is
not one wasted scene in this feature. Even the clips in the trailer are
connected.

So what we have is a story of Kenai's journey of discovery, not only of
the world around him but of himself and how he fits into it. By the end
of his journey, Kenai understands what his destiny is and embraces it.
In doing so, he's knows he can make a difference in this world by being
able to help Koda as well as being able to help his people avoid a
tragic fate. That's right, the real message of this story has direct
application to today's world.

Major morals from the story:

1) We are all brothers and sisters in this world.

2) See and understand the other person's point of view (even if you
don't agree with it).

4) Being responsible for your actions.

6) There is no greater love than the ability to sacrifice oneself for a
friend.

7) To those ruled by hate and fear: ….a) No matter who you are or how
talented you may be, you will not last long in this world. ….b) It's
not wise to pick a fight with bears.

As far as sequels go, it will be hard to improve on a masterpiece. But
if Disney pursues one, they have their work cut out for them, as they
need to remain true to the real story of Brother Bear. However, I would
strongly make a case for a spin-off for Rutt and Tuke as they have
serious franchise potential with their moose appeal (whoops meant mass
appeal) and drawing power. You either love them or you love to hate
them, eh.

That about wraps it up so I think its time for some barley and hops all
covered in dew (properly aged of course).

TagsUSA
In America
The Matrix Revolutions