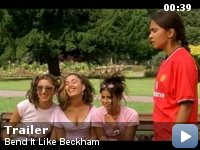 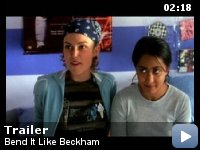 The daughter of orthodox Sikh rebels against her parents' traditionalism by running off to Germany with a football team (soccer in America).

Storyline
A comedy about bending the rules to reach your goal, Bend It Like Beckham explores the world of women's football, from kick-abouts in the park to freekicks in the Final. Set in Hounslow, West London and Hamburg, the film follows two 18 year olds with their hearts set on a future in professional soccer. Heart-stopping talent doesn't seem to be enough when your parents want you to hang up your football boots, find a nice boyfriend and learn to cook the perfect chapatti.

Jules's wears #9 for the Hounslow Harriers, the same number as Mia Hamm.

Crew or equipment visible:
A crew member was in the back seat, rocking the car at the airport that Jess's sister and her fianc» are in alone. At one point you can see three heads pop up over the seat.

Mrs. Bhamra:
[after having agreed to let Jess go to America]
At least I taught her full Indian dinner, the rest is up to God.

`Bend It Like Beckam' is a heartwarming charmer about a young girl's
search
for identity in 21st Century England. Like `Fiddler on the Roof,'
`Beckam'
deals with the painful struggles tradition-bound cultures must go through
as
they enter a looser, more freedom-loving modern world. The culture in
this
case is that of immigrant and first-generation Indians living in Great
Britain. As with all such tales, it is the young folk who feel the need
to
pull away from the stuffy values of the past, and who end up dragging the
reluctant older folk kicking and screaming into the future right along
with
them.


Jess Bharma is a fairly typical teen with dreams of becoming a world-class
soccer player. However, Jess also comes from a very traditional Indian
family that believes a girl should not play around with boys, show her
legs
in public, or aspire to much beyond marrying a good Indian boy and raising
a
family. We've seen this kind of set-up countless times before and `Bend
It
Like Beckam' will certainly not win any prizes for creativity or
originality. It does, however, have a youthful exuberance and a generous
spirit that can't help but captivate even the most diehard, coldhearted
cynic. Parminder K. Nagra is utterly winning as young Jess, capturing all
the innate optimism and unquenchable enthusiasm of this irrepressible
character. She receives superb support from a cast of outstanding actors,
both young and old, including Keira Knightley as Jules, her inspirational
buddy who provides Jess with the opportunity to bring her dreams to
fruition; Jonathan Rhys-Meyers as Joe, the handsome young coach who
provides
lessons in love along with lessons in soccer; Anupam Kher as Jess' father,
who turns out to have some of his own personal demons to deal with;
Shaheen
Khan as Jess' mother, who doesn't understand why her daughter can't be
content with the pre-ordained life her parents have laid out for her; and
Juliet Stevenson as Jules' mother, who proves that Indians don't hold a
patent on tradition-obsessed parents. In its quiet, gentle way, the film
also confronts the issue of racism, particularly in terms of how the
Indians
are often still treated as second-class citizens in British
society.

As directed by Gurinder Chadha, `Bend It Like Beckham' is a
light-on-its-feet `feel-good' film that never takes itself too seriously.
The movie suffers a bit from a sitcom mentality, as when, for instance,
Jules' parents labor under the illusion that their daughter and Jess are
actually lesbian lovers. The plotting, in addition to being predictable
at
times, often seems contrived and excessively melodramatic (the rivalry
between Jess and Jules over Joe being the primary offender). But this
isn't
enough to do any serious damage to the film as a whole.

Thus, if you're looking for a film that is easygoing, uplifting and
comfortably old-fashioned in its demeanor and theme, `Bend It Like
Beckham'
is for you.