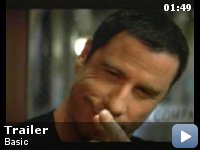 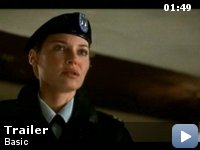 A DEA agent investigates the disappearance of a legendary Army ranger drill sergeant and several of his cadets during a training exercise gone severely awry.

Storyline
Tom Hardy, an ex-Army Ranger turned DEA agent, is drawn into an ever-widening mystery surrounding the disappearance of the feared and often hated Sgt. Nathan West, as well as several of his elite Special Forces trainees on what appears, at first, to have been a routine training exercise during a hurricane in the jungles of Panama. Only two survivors are found, Dunbar, and a badly wounded Kendall, the son of a high-profile Joint Chiefs of Staff official. Neither is willing to cooperate with Capt. Julia Osborne's investigation. So base commander Col. Bill Styles calls in ex-Ranger Hardy, an old friend and a persuasive interrogator. Osborne disapproves of Hardy who is on leave from the D.E.A. after having come under suspicion of accepting bribes from local drug traffickers. She is also uneasy when she learns that Hardy once trained under West and hates him almost as passionately as his current recruits…

In order to give Roselyn Sanchez the proper posture, John McTiernan had her wear a 50-pound bag of sand on the front of her belt while at the same time told her to imagine herself as a Las Vegas showgirl.

Errors made by characters (possibly deliberate errors by the filmmakers):
The movie claims that the Provost Marshal is "the closest thing we have to an investigator". Not only was there a Criminal Investigation Divison field office in Panama at the time the movie was set in, the Provost Marshals office has it's own Military Police Investigations office.

Osbourne:
[narration]
The French tried to build a canal here before the Americans. At the height of their effort, 500 workers were dyin' a week from malaria and yellow fever. They couldn't come up with cemetary space fast enough. Not to mention the morale problem all those crosses would have made…

"Basic" takes a lot of plot twists through the steamy jungles of Panama.
They are often impossible to follow. No, literally. Impossible. As in they
literally do not piece together. You can try to analyze them, but when you
do, you find out there is nothing really to be analyzed. But the film, by
confusing and tricking the audience, makes it appear as if something is
there, which is almost as good as if something really is there. Therefore,
the movie, though frustratingly difficult to follow at times, is
entertaining. Confused yet? Yeah, that's what the movie will make you feel
like.


The film opens up in a rain-drenched Panama jungle at night on an Army
training mission headed by Sergeant West (Samuel L. Jackson). Most of the
film–ALL of the film, for that matter–takes place at night, during a rainy
hurricane, and adds to the nonexistant plot. What is so intriguing is that
the plot isn't really there, but the writer tries to manifest one, and we
feel as if we are staring at some nonexistant, material wad of words and
flashbacks and images thrown together in a blender, the writer hoping for it
to come out smelling of roses. But I already went over that, didn't I?

Flash forward to the next day. An Army chopper picks up two men from the
training mission, one injured and one very much alive. The injured man,
Kendall (Giovanni Ribisi), is sent to a hospital, and the alive man, Dunbar
(Brian Van Holt) is sent in for questioning by the very sexy and very
Southern Osborne (Connie Nielsen). Dunbar refuses to speak to anyone except
a Ranger. So in comes Ranger Tom Hardy (John Travolta) to piece together the
events surrounding the death of Sgt. West and his team.

The writer of "Basic," James Vanderbilt, has so many twists and turns that
the film is impossible to keep up with. I like movies like these, where you
see different characters telling their version of one event, but the mistake
Vanderbilt makes is that he overuses the plot flashbacks in the middle of
other events. It becomes hard to seperate present from past and what's real
from what's not. So many revelations happen that I feel like I'm in the
middle of the writer's mind, as he comes up with new ideas and tries to
squeeze them in time after time after time. There is a limit to how many
times you can use "surprise" revelation endings. Vanderbilt uses three of
four in a row, piled on top of each other, time after time after time. Just
as we think the plot twists are done, and we start to smile because we think
we might finally understand the basis of the plot, something else happens,
and we zoom in suspensefully on John Travolta's face as he, along with the
audience, realizes something. Which leads me to something else.

The end of the film leaves more open than concluded. So many plot holes are
never ironed out. With the ending being the way it is, you can look back at
certain events and think, "Why did that surprise (so-and-so)," and "Why did
that event happen as it pays no relevancy to the plot?" The answer to all
this? Simple: It's called audience manipulation, and James Vanderbilt uses
it a lot. He throws the audience a bone to keep them happy, continues with
something else, throws another bone, and when it's all done and over, we're
choking on all these bones and he doesn't realize it. Interesting how he
said he named his character Tom Hardy after the Hardy Boys. If I recall, the
Hardy Boy novels, which I was an avid reader of at one time, usually
revealed a lot at the end. "Basic" tries to, but does not.

The film has an excellent director at its helm, John McTiernan. A man who
chooses his projects carefully and wisely and, unfortunately, sometimes
horribly ("Rollerball" was exceptionally bad). But "Die Hard" and "Predator"
are two of my all-time favorite action films, "Predator" being my all-time
favorite "alien" movie. Who wants McTiernan to return to his roots and film
a "Predator 3"? It would be good, but don't count on it. Like I said, he
chooses wisely, and if I assume correctly, he's the kind of director who
doesn't like to return to old projects.

"Basic" confused me, but after the film was over and my mind was in a knot
trying to figure out all the different plot twists, I realized how much fun
I had being duped by this film. I laughed to myself as I came to realize
that this movie has a paper-thin plot, and the filmmakers all tricked us by
taking so many twists and turns and throwing so many confusion bones at the
audience and making us believe that the underlying plot of the film was
something deep. I really enjoyed this movie, even if I still don't really
understand it fully. Then again, I don't think you're really supposed to.