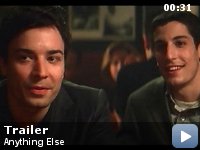 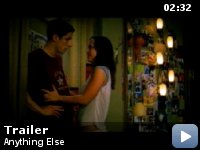 A contemporary romantic comedy set in New York city about the relationship between an older guy and his younger protege. The older guy guides the younger through a messy and hilarious love story.

Storyline
In medias res: narrator Jerry Falk, a fledgling comedy writer with an inept agent, is about to celebrate an anniversary with his girlfriend Amanda. There's trouble in paradise: she's late (and has already eaten), she's been uninterested in sex for months, and her quixotic mother is moving in with them. Jerry looks back to meeting Amanda and dumping Brooke. A constant is his friendship with another wannabe comedy writer, a 60 year old teacher named David, prone to long walks and advice filled talks. As Amanda and Jerry's relationship founders and her mom's noisy presence makes writing difficult for him, he and David plan something different. Wouldn't anything else be better?

Taglines:
In any relationship, one person always does the heavy lifting

This is loosely based on Woody Allen's experiences of being a young comedy writer, he married young, and met an older man who taught him a lot about life, comedy, philosophy, and was institutionalized.

Factual errors:
Jerry Falk refers to a baked cannoli when in fact cannoli shells are deep fried not baked. Perhaps, Woody Allen was thinking of cannelloni.

David Dobel:
You know, there's great wisdom in jokes, Falk, really. There's an old joke about a prizefighter who's in the ring, and he's getting killed, he's getting his brains beat out; and his mother's in the audience, and she's watching him getting beaten up in the ring…

Some reviews are so predictable


The predictability of the reviews on this database is hilarious. Every
Woody Allen film gets…'it's not as good as Annie Hall'. Over and over
and over again. As though Woody Allen has committed a heinous crime in
making a supposedly lesser film. Just as every Martin Scorsese film
gets a run of 'It's not Raging Bull or Goodfellas'. Over and over and
over again. I think that sometimes people sit down intent on wallowing
in gloom, specifically to compare a film negatively with a director or
actor's previous works. Probably the sort of irritating people who go
back to the same place on holiday every year and complain that it was
cheaper last year, much more fun and friendly and the place has become
too commercialised.


Quite frankly I don't care if Anything Else is as good as Annie Hall. I
loved it. From start to finish I laughed out loud at the fantastic
dialogue, and unlike others I thought the acting was superb. Having
heard next to nothing about it on release, this was one of the most
unexpectedly funny, heart warming and intelligent films I have seen for
some time.