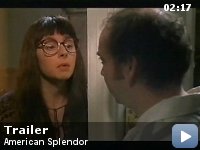 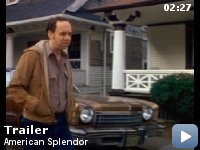 Storyline
Harvey Pekar is file clerk at the local VA hospital. His interactions with his co-workers offer some relief from the monotony, and their discussions encompass everything from music to the decline of American culture to new flavors of jellybeans and life itself. At home, Harvey fills his days with reading, writing and listening to jazz. His apartment is filled with thousands of books and LPs, and he regularly scours Cleveland's thrift stores and garage sales for more, savoring the rare joy of a 25-cent find. It is at one of these junk sales that Harvey meets Robert Crumb, a greeting card artist and music enthusiast. When, years later, Crumb finds international success for his underground comics, the idea that comic books can be a valid art form for adults inspires Harvey to write his own brand of comic book. An admirer of naturalist writers like Theodore Dreiser, Harvey makes his American Splendor a truthful…

Cameo:
[Gary Dumm]
longtime American Splendor artist is the gray-haired man getting his copy of "Our Cancer Year" autographed.

Anachronisms:
The red and white Ohio license plate on Toby's station wagon was actually in use during the years of 1976-1979. Since he was going to see
Revenge of the Nerds, the correct Ohio license plate would have been blue lettering on a white background which was issued during 1980-1984.

Toby Radloff:
I'm not going to be eating dinner until very late and this has got to hold me over.

Toby Radloff:
No. I'm driving to Toledo to see a movie. Wouldya like to come?

Harvey Pekar:
Well, you know, chick I'm marryin' is from Wilmington. Plus I gotta help her move her stuff back here. Why are you driving to Toledo to see a movie, Tob'?

Toby Radloff:
It's not playing at the Mapletown. I didn't know you had a girlfriend Harvey.

In `American Splendor,' Paul Giamatti plays Harvey Pekar, the comic book
creator who became famous as a recurring guest on the David Letterman Show.
A resident of Cleveland, Pekar was a socially backward man who found he had
the talent to translate the pain, loneliness and frustration of his own
unhappy life into universal truths, writing material that other artists
would then illustrate in comic book form. He began a series entitled
`American Splendor,' which was really an ongoing autobiographical narrative,
drawing on people and events in his own life as his source of inspiration.
The film, a pseudo-documentary of sorts, tells his life story by cutting
back and forth between both staged reenactments of the events in the stories
and interviews with Pekar himself commenting on those events.


`American Splendor' is an offbeat little gem that, in many ways,
approximates the look and style of a comic book. As the story plays itself
out, captions often appear on the screen, as well as illustrations from
Pekar's actual work based on the scene we are witnessing. Robert Pulcini
and Sheri Springer Berman, who wrote and directed the film together, create
a surrealistic tone by having Pekar and his real friends and companions
frequently appear on screen next to the actors who are portraying them (some
of them dead ringers for the originals). This technique brings a homespun,
homey sweetness to the film. `American Splendor' is a paean to all the
social misfits in the world, people who, for whatever reason, can't seem to
fit into society's prescribed mold but who often develop strong, meaningful
bonds with similar individuals. The movie is also a tribute to the power of
art, both for the artist who finds purpose and release through his work and
for those to whom his work speaks on a personal and emotional level. The
people who inhabit Pekar's strange world – both in reality and within the
borders of his comic strip boxes – are seen in the film as warm,
good-natured individuals, not socially astute, perhaps, but not losers
either.

The emotional focal point for the film is Harvey's relationship with his
wife, Joyce, beautifully played by Hope Davis. Despite the somewhat bizarre
nature of their marriage, Harvey and Joyce forge a lasting commitment based
on reciprocity and devotion. In fact, in the latter sections, the film
achieves an emotional depth one doesn't expect it to early on, partly
because Harvey is dealt a cruel blow of fate that he and his wife are forced
to navigate through together. Yet, the film as a whole is filled with a
sly, deadpan, mischievous sense of humor that demonstrates a keen grasp of
the absurdities of life.

As Pekar, Paul Giametti turns in a flawless performance, capturing the
nebbishness, cantankerousness and ultimate likeability of the man he is
portraying.

In both style and content, `American Splendor' is aptly
named.

TagsUSA VA
Interstate 60: Episodes of the Road
Anything Else