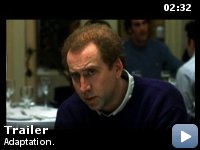 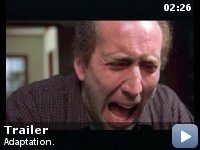 A lovelorn screenwriter turns to his less talented twin brother for help when his efforts to adapt a non-fiction book go nowhere.

Storyline
Frequently cynical screenwriter Charlie Kaufman has just taken on a new assignment. That is, to adapt writer Susan Orlean's "The Orchid Thief" into a screenplay, all of it based on the life of the eccentric John Laroche, an exotic plant collector based out of Florida. While his easygoing twin brother Donald, is writing scripts with ease, Charlie finds himself on a perpetual struggle that never seems to end.

Nicolas Cage was given completely separate credits for Charlie Kaufman and Donald Kaufman. The credits were given in order of appearance and each of Nicolas Cage's credits appeared in the order that Charlie and Donald appeared.

Continuity:
At the end of the film when Charlie Kaufman pulls out of the parking garage, a woman (Jennifer Porst) sits next to him in the car for a single shot, though he is riding alone.

Charlie Kaufman:
[voiceover]
Do I have an original thought in my head? My bald head. Maybe if I were happier, my hair wouldn't be falling out. Life is short. I need to make the most of it. Today is the first day of the rest of my life. I'm a walking cliché. I really need to go to the doctor and have my leg checked…

I've read many of the comments regarding Adaptation, and it seems as
though most people have disliked this movie because of its ending. They
make claims such as, "Kaufman's script was great until the end," or,
"Why did Kaufman talk about not wanting to "hollywoodize" his script,
and then do it in the end anyway?"

I don't think most people understand why he did it.

Throughout the movie, Kaufman's character keeps stressing how much he
doesn't want to make a "Hollywood" film. Hollywood-type films have sex,
drugs, car chases, and most importantly, characters who succeed in the
end. So at a glance, it seems that Kaufman goes against his inner most
desires regarding the film because he does "hollywoodize" it.

But that is what I find to be the most clever part of his screenplay.
To explain my point, try to imagine this-what if Kaufman did not
"hollywoodize" his script? If he didn't do it, Kaufman would not have
added car chases, sex, and drugs. So in a way, if this were the case,
Kaufman would have succeeded. But you see, that is the point. Kaufman
DID NOT want his character to succeed in the end. Like he explained
throughout the movie, "I don't want to have a film…where characters
succeed in the end." Thus, since Kaufman ultimately fails at his
attempt to adapt Susan Orlean's book into a screenplay in how he
originally intended, he delivers a screenplay that is not your normal
hollywood film, i.e., a film where the protagonist prevails.

Basically, in order to make his film "un-hollywood," he "hollywoodizes"
it. Can nobody see the genius of this?

Anyway, I just thought that I could offer everyone my take on the movie
so that you all may perceive Kaufman's ending in a different light.