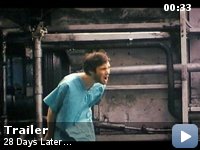 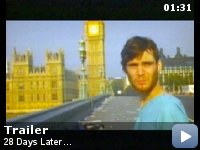 Four weeks after a mysterious, incurable virus spreads throughout the UK, a handful of survivors try to find sanctuary.

Storyline
Animal activists invade a laboratory with the intention of releasing chimpanzees that are undergoing experimentation, infected by a virus -a virus that causes rage. The naive activists ignore the pleas of a scientist to keep the cages locked, with disastrous results. Twenty-eight days later, our protagonist, Jim, wakes up from a coma, alone, in an abandoned hospital. He begins to seek out anyone else to find London is deserted, apparently without a living soul. After finding a church, which had become inhabited by zombie like humans intent on his demise, he runs for his life. Selena and Mark rescue him from the horde and bring him up to date on the mass carnage and horror as all of London tore itself apart. This is a tale of survival and ultimately, heroics, with nice subtext about mankind's savage nature.

Taglines:
Be Thankful For Everything, For Soon There Will Be Nothing…

The scene when Jim finds the money on the steps and picks it up, was based on a photograph Danny Boyle had seen of Cambodia after Pol Pot had been driven out.

Factual errors:
Major West's SA80 fires many more rounds than would likely be in the magazine. Although this is a widely used technique in movies, most hand held weapons only give less than a minute of fire, before they need to be reloaded


Perhaps I'm a little biased. After all, this is set in the city I live
and work in, and seeing Oxford Street and Piccadilly Circus, which I
pass by every morning and which are usually teeming with crowds of
people, completely empty was enough to send shivers down my spine.
Usually when you watch a movie like this it's located in some
nondescript Midwestern village, which makes it easy to detach yourself
from the events unfolding on screen. But seeing them occur in the place
you call home is something that gives it an entirely new sense of
reality, and one I was previously unaccustomed to.


Still, judging 28 Days Later entirely on its merit as a film, it's easy
to arrive at the conclusion that it's a fantastic achievement, as well
as a coming-of-age of sorts for director Danny Boyle; I can't say the
MTV-inspired vanity of The Beach, or the self-consciously trendy
posturing of Trainspotting appealed to me, and to my shame I initially
expected 28 Days Later to be given a similar treatment. Thankfully, my
fears proved unfounded, discarded straight after a opening sequence
which is at once effortless and fearsome. The rest of the movie was a
joy. A terrifying joy, but a joy nonetheless.

It's true that sometimes minimalism can be more effective than
overblown bravado, and it's definitely true for this movie. It's the
scenes of complete silence which get to you the most; an entire
metropolis empty. The grainy picture serves to add a documentary-style
quality to the film, which makes the whole situation seem almost too
real to bear. Definitely a wise choice to film this on digital video.

You will occasionally meet people who thought 28 Days Later wasn't
'scary' or 'gory' enough. These are the same people who will tell you
that 2001 was 'boring', or that Memento was 'confusing'. Ignore them.
Others didn't understand the purpose of the second half, or were
confused by its change of pace, feeling that it distracted from the
movie as a whole. However, I personally regard the second half as very
important because, as another reviewer pointed out, it makes a very
succinct point: What is scarier, the end of the world, or having the
world repopulated by maniacs? That, I think, is where the real Horror
of 28 Days Later lies.

28 Days Later, like the Romero zombie flicks of yore, is ultimately an
allegory of the days we are living in, an age in which we are
constantly confronted with violence by the media (much like the ape
right at the start of the film), where violence begets violence, and
humanity faces an uncertain future. I applaud Danny Boyle's bravery in
making 28 Days Later because he undoubtedly took a big commercial risk
when the majority of the cinema-going public might prefer escapism to
words of caution. Remember, Rage is a human-made disease. Quite the
allegory there.

Like most great masterpieces of their time, 28 Days Later has been
misunderstood by a considerable amount of people. I have no doubt it
will go down in history as a classic, the one movie which perfectly
sums up the confused era we are living in. And even if you didn't like
it, it would be advisable to give 28 Days Later another chance; it's a
haunting experience when looked at from the right angle. Danny Boyle
has many years left in him, I hope he'll continue making more movies
like this.