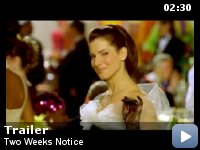 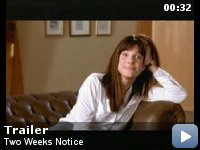 A lawyer decides that she's used too much like a nanny by her boss, so she walks out on him.

Storyline
Explores the question of whether it's ever too late to say 'I love you'. The story revolves around Lucy Kelson, a brilliant but neurotic attorney, and her client, who is "charming, irresponsible and fabulously wealthy."

Scenes for the movie were shot at Shea Stadium on May 9, 2002. Between innings of the Giants/Mets game, the crowd was filmed booing. Hugh Grant and Sandra Bullock attended the game and shot a scene with Mike Piazza of the Mets after the game.

Audio/visual unsynchronized:
During the "stapler fight" the actresses lips have no relation to the audio track.

George Wade:
[walking back and forth]
I can't believe how small this apartment is, it's actually shocking!

George Wade:
It's a very good thing your parents went to the movies, we'd never have squeezed in!

George Wade:
You realize, I can actually move from one side of this apartment to the other in 6 seconds. Watch this,
[steps off]


Sandra Bullock and Hugh Grant hearken back to classic screwball
comedies in a very engaging if somewhat shallow romantic film that
accentuates laughter above sentiment and succeeds wonderfully – even
when it's not especially witty or gut-busting.

Bullock plays Lucy Kelson, a committed left-wing attorney with an
immaculate Ivy League background who fights the good fight against the
heartless developers of lower Manhattan and the outer boroughs.
Complications ensue when she finds herself working for one such figure,
George Wade (Grant) in exchange for his preserving a Coney Island
landmark near her childhood home. Wade's not a bad guy, but he's
frightfully dependent on Lucy for everything. When it seems possible
she might at last get clear of him, she begins to have second thoughts
about letting him go.

Two things I really, really like about this movie. One is the chemistry
of Grant and Bullock. Bullock takes to being the butt of assorted
slapstick with a gusto rare for a gorgeous screen star. She seems to
have inherited the Doris Day mantle from Julia Roberts and Meg Ryan,
though in a better way than either of those two screen stars. It's a
pity she's since shown no interest in maintaining it. Grant plays off
her very well in a role he could perform in his sleep – and sometimes
seems to do just that, albeit in a good way. He has a casual way with a
line that reminds me of Roger Moore or David Niven at their best, and
shows he is growing comfortably into a solid on-screen presence after
years of coasting on looks and charm. If IMDb.com is correct, he got
paid $12.5 million for this, which if true is way too high, but he is
probably the one guy who could make Wade so enjoyable, to the point
where you're happy at his shenanigans for keeping Lucy by his side.

The other thing is the NYC backdrop. There's some eye-popping visuals
courtesy of legendary cinematographer Laszlo Kovacs, like the bridges
lit up like Christmas trees in the background while Bullock has a drunk
moment with Grant aboard his yacht. Another scene features a helicopter
shot of Manhattan by the Hudson, with a nice nod at 9/11 that doesn't
impose itself on the viewer but is there for the noticing. (This was
the first film shot in the city after the tragedy.) You can compare
"Two Weeks Notice" with classic romantic comedies like "What's Up Doc?"
or "Bringing Up Baby." Not that it's as good, but the goal is similar
in that it strives to entertain more than play with one's heartstrings.

Alright, the story is shallow. We never really get a sense of Kelson's
duties with Wade except when it comes to being pulled out of weddings
to pick out ties. Her absentee boyfriend is barely established. The
supporting cast is not well developed, except Robert Klein and Dana
Ivey as Lucy's parents. (Klein especially is wonderful.) Alicia Witt is
spellbindingly gorgeous as Kelton's would-be replacement, and she plays
wonderfully off the main pair, but she's suddenly thrust into the role
of the heavy simply for plot convenience, and it's jarring. Too many
other secondary roles are like that, too.

The script, by director Marc Lawrence, has its share of lame
one-liners, but it keeps a steady, merry tempo that distracts from the
film's shortcomings at least somewhat while focusing on its key
strengths, Bullock and Grant. Lawrence's direction is similarly solid.
I like the little bits of business between Bullock and Grant, like when
they pick off each others' plates at Fraunces Tavern, or when she
refuses his offer of a sidewalk kebob, calling it a "flesh popsicle."
The scene that sticks out most is of her at an outdoor party, wearing a
lovely tulle gown and a clown nose. This is one film that makes a
serious point of being goofy and glamorous all at once, and it works.
If all romantic comedies were so committed to being entertaining, it
would be a lot easier for us guys to sit through them.

TagsUSA
The Lord of the Rings: The Two Towers
Catch Me If You Can