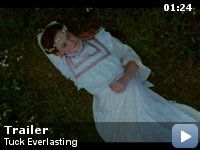 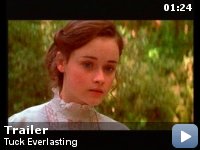 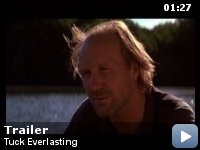 A young woman meets and falls in love with a young man who is part of a family of immortals.

Storyline
Tuck Everlasting is the story of a girl named Winnie and a family whom she meets, the Tucks. The Tucks have a secret, they're immortal.They drank water from a spring that was actually a fountain of youth. Until the end of time, they will stay that way. Winnie falls in love with one of the Tucks, Jesse, a "17"-year-old boy who shares the same feelings for her. Scared of death, Winnie must choose between being immortal and being with Jesse or following the circle of life and dying someday. The Tucks try to teach her how she shouldn't fear death, how they would give anything to die. It teaches the importance and understanding of life and death.It shows that you should not fear death, but to fear an unlived life.

Man in the Yellow Suit

Taglines:
The spring holds the secret, the secret of life and death

Continuity:
When Robert Foster is talking to the Man in the Yellow Suit at the police station, the right-hand side of the collar of the man's shirt keeps on going up and down between shots.

Jesse:
How am I supposed to take you home when I can't make my feet move from this spot? If I could die tomorrow I would, just so I could spend one more night with you.

A young rich girl (Alexis Bledel) in the early 1990s, meets and falls
in love with Jesse Tuck (Jonathan Jackson). The problem is that he's
part of a family that are immortal.

I read this book in college as part of a Children's Literature class. I
love it! I thought it was just incredible. I never saw the 1980 version
of this and when I heard Disney was going to redo it I expected the
worst. Fortunately I was wrong. Disney made a quiet, beautiful,
charming fantasy film. They don't overdo the sentimentality (as they
could have) and make the story quite moving and engrossing.

This is also a rare film where virtually every performance is
good–especially Bledel and Jackson. But Sissy Spacek, William Hurt,
Amy Irving and Scott Bairstrow also turn in very good acting. And
Elisabeth Shue narrates and does an excellent job.

This is beautiful–well-directed and acted with a sweeping music score.
I was captivated from beginning to end. This failed at the box office
but it really should be rediscovered. I give it a 10!