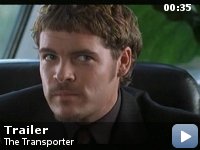 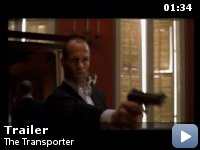 This film is about a man whose job is to deliver packages without asking any questions. Complications arise when he breaks those rules.

Storyline
Ex-Special Forces operator Frank Martin lives what seems to be a quiet life along the French Mediterranean, hiring himself out as a mercenary "transporter" who moves goods–human or otherwise–from one place to another. No questions asked. Carrying out mysterious and sometimes dangerous tasks in his tricked-out BMW, Frank adheres to a strict set of rules, which he never breaks. Rule One: Never change the deal. Rule Two: No names–Frank doesn't want to know whom he's working for, or what he's transporting. Rule Three: never look in the package. Frank's newest transport seems no different from the countless ones he's done in the past. He's been hired by an American known only as "Wall Street" to make a delivery; but when Frank stops along the route, he notices his package is moving. Violating Rule Three, Frank looks inside the bag, finding its contents to be a beautiful…

Taglines:
Rules are made to be broken

Factual errors:
When Frank's house is being attacked, despite the gunmen firing high-powered assault rifles on full-auto and while standing, there does not seem to be any significant recoil as all the bullets strike Franks's house at roughly the same height. Given the distance and style of fire, this is simply not feasible, no matter how skilled the marksman.

Pilot:
this plane isn't for tourists
[Frank pulls out gun]

Frank:
I'm not a tourist.

`The Transporter' is pretty good for what it is – a sleek, slick,
high-octane action thriller that couldn't possibly expect us to believe
anything we are seeing on screen and, quite frankly, doesn't care that we
don't. That attitude is probably all for the best in this case, since it
allows the filmmakers to devise elaborate action and stunt sequences
without
having to pay the slightest heed to that fantasy killjoy known as
`credibility.'


Jason Statham literally drips attitude as The Transporter, a stolid,
nattily
dressed former military man who spends his time delivering packages (no
questions asked) all over the French Mediterranean for what turn out to
be
some pretty shady criminal clients. One day he discovers that the
`package'
he is to deliver happens to be a human being – a pretty young Chinese
girl
named Lai Kwan who has been dropped, bound and gagged, into the trunk of
the
sporty car on which he lavishes most, if not all, of the love and caring
he
has to offer. Yet, Frank turns out, despite his initial air of callous
and
self-serving indifference, to be a criminal-type with a heart of gold,
and
he is soon helping Ms. Kwan foil an attempt by her nefarious father to
sell
a crate load of Chinese immigrants into slavery. However, the plot is
the
least of the matter when it comes to a movie like `The Transporter.'
This
film is far more concerned with attitude and style than it is with its
storyline, which exists merely as a vehicle on which to hang all the
explosions, car chases and kickboxing fight scenes that have become the
stock-in-trade for modern action pictures. The movie is well directed,
well edited and quite beautifully photographed by cinematographer Pierre
Morel, who gives the film's French Riviera setting a bright, sparkling
sheen. In fact, Morel's camerawork here is some of the best I have seen
in
a film in a very long time.

In addition to Statham, who makes for a very `cool' action film hero,
Francois Berleand turns in a wonderful performance as a shrewd,
wisecracking
police inspector who knows that Frank is up to something but who has
enough
faith in his own instincts to at least give the man the benefit of the
doubt. Qi Shu is cute and charming as the uninvited and unwelcome
`complication' that steps into Frank's smooth-running, well-ordered
life.

`The Transporter' is the cinematic equivalent of junk fast food – not
high
in nutritional value, but quickly consumed and satisfying when you don't
have the time or inclination for something more demanding. Like its
cool-under-pressure protagonist, the film delivers the
goods.