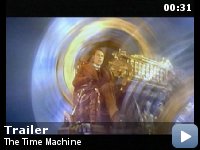 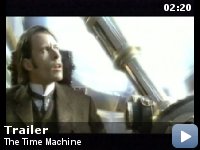 Hoping to alter the events of the past, a 19th century inventor instead travels 800,000 years into the future, where he finds humankind divided into two warring races.

Storyline
Based on the classic sci-fi novel by H.G. Wells, scientist and inventor, Alexander Hartdegen, is determined to prove that time travel is possible. His determination is turned to desperation by a personal tragedy that now drives him to want to change the past. Testing his theories with a time machine of his own invention, Hartdegen is hurtled 800,000 years into the future, where he discovers that mankind has divided into the hunter – and the hunted.

Taglines:
Where Would You Go?

A picture of H.G. Wells is visible in Alexander's house in several shots.

Revealing mistakes:
When Alexander is unconscious traveling into the future, the dials on the time machine seem to be spinning at a rate of around one million years per second. He would have far surpassed the year 802,701. This shows that the dials were made to just spin, rather than count.

How life must have changed for actor Alan Young during forty two years!

THE TIME MACHINE which I first saw at its London premiere in 1960 has long
remained a personal favorite of mine. I bought the film 17 years ago and my
own children grew up with it during the many times we have watched it since.
It had a distinct charm and news of its impending remake was of no interest
to me…another un-reworkable film if ever there was going to be one! I had
no interest in its existence and even less inclination to see it. Dragged,
protesting to the theater recently by my daughter who had already seen it
and who, under the insane belief that I would enjoy it, strapped me into the
seat! Raving incoherently and fully intending to dislike each and every
frame, I watched what I expected to be my greatest nightmare since SPEED
2.

Well girls and guys…I was so wrong! The remake not only captures and
enhances the memory and feel of the original in many ways, it is vastly
better! Pearce, who improves mightily as the film progresses (his early
wimpy appearance telegraphed danger as far as I was concerned!) is just
plain excellent as the slightly unhinged designer. The time machine itself
(understandably, with today's fx potential) creams Rod Taylor's 1960
mini-umbrella! Mark Addy makes a great "Philby" very much in the style of
Alan Young's original characterisation. Nice touch too, having him cameo
here as the florist! For him of course, he has experienced his own "time
machine" in the 42 intervening years!

"One hit wonder" Samantha Mumba is an acting natural and as the Eloi girl,
hits exactly the right note called for in the role. Both she and her younger
brother Omero contribute greatly to the film's success. Everything about
this film is visually impressive. Wonderfully imaginative sets and masterful
cinematography. Jeremy Irons' small but significant role comes off well
too!

I read complaints about the Morlock make-up? Hello? any of you ever SEEN a
Morlock? No??? well then, kindly refrain from negative comment. These guys
looked and moved way better than the little furry 1960 creations! I liked
also the intent NOT to have Pearce able to reverse the death of his fiancee
– that was heightened awareness on someone's part!

Add to the above a superb musical score and if this doesn't all make for an
entertaining and thought provoking film, hey guys, you're hard to please.
Certainly this was never intended for THE FAST AND THE FURIOUS set! It is
inarguably the best remake I have ever seen and one of only a few have that
ever managed to improve on the original!