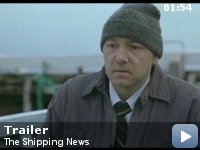 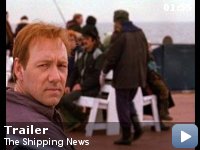 An emotionally-beaten man with his young daughter moves to his ancestral home in Newfoundland to reclaim his life.

Storyline
An inksetter in New York, Quoyle returns to his family's longtime home, a small fishing town in Newfoundland, with his young daughter, after a traumatizing experience with her mother, Petal, who sold her to an illegal adoption agency. Though Quoyle has had little success thus far in life, his shipping news column in the newspaper "The Gammy Bird" finds an audience, and his experiences in the town change his life. Then he meets the widow Wavey…

Gordon Pinsent, who played Billy Pretty in the film, was the only leading actor who was a native Newfoundlander. He was a dialect coach for a number of actors in the film including Kevin Spacey and Dame Judi Dench.

Continuity:
The headless body apparently disappears from the water in the short time it takes Quoyle to swim to the cooler.

[Tert is ordered to buy Quoyle a new computer]

Tert Card:
Go back to your work Quoyle!

Spacey and Hallstrom shine in a moving story

Director Lasse Halstrom continues to prove himself to be outstanding at
presenting sensitive human dramas with this touching film about a broken
man's retreat to his ancestral roots. This poignant tale unwinds
deliberately and delicately as each of the main characters shares his or her
dark secrets buried in the past.

Halstrom is an inspired actors' director who entices outstanding
performances from his troupe. He has a wonderful ability to make simple
characters appear bigger than life. I continue to admire his unobtrusive
presentation, forgoing ostentatious directorial stylizing in favor of simple
shots that let the story and the characters dominate. The cinematography
and choice of locations in this film are understated and lovely without the
need for garishness.

The acting is superb. Kevin Spacey, as Quoyle, once again shows his range,
taking on an emotionally crippled character that is quite unlike the
confident and clever characters that jump off his resume. Spacey
relinquishes all traces of the cockiness that is his trademark and
brilliantly renders a pathetic nebbish whose greatest daily struggle is to
overcome his own ennui. For Spacey to suppress his natural dynamism to
slip this character on so effectively is a testimony to his excellence as an
actor.

While this is clearly Spacey's film, the supporting cast of accomplished
veterans weaves a splendid tapestry. Julianne Moore is excellent as
Quoyle's love interest with a delicate portrayal of a character that is
simultaneously supportive and insecure. Judi Dench is marvelous as Quoyle's
crusty old aunt, who drags him back to Newfoundland to find himself among
the ashes of his unseemly clan. Cate Blanchett is bodacious as the
impulsive vamp who ravishes Quoyle and stays with him only long enough to
give him a daughter. Scott Glenn is terrific as the cantankerous publisher
of the local newspaper who turns Quoyle from a typesetter into a
reporter.

This film is not for everyone. It is extremely deliberate and will fray the
patience of the average viewer. However, for those who have a love of human
interest stories with flawed but lovable characters, this will be a treat.
I rated it a 9/10. It is a gem of human foibles and interactions that is
moving and insightful.