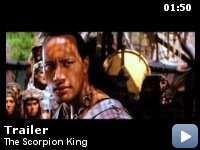 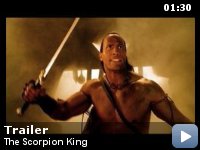 A desert warrior rises up against the evil army that is destroying his homeland. He captures the enemy's key sorcerer, takes her deep into the desert and prepares for a final showdown.

Storyline
In an ancient time, predating the pyramids, the evil king Memnon is using the psychic powers of his sorceress Cassandra to fortell his great victories. In a last ditch effort to stop Memnon from taking over the world, the leaders of the remaining free tribes hire the assassin Mathayus to kill the sorceress. But Mathayus ends up getting much more than he bargained for. Now with the help of the trickster Arpid, tribal leader Balthazar and an unexpected ally, it's up to Mathayus to fufill his destiny and become the great Scorpion King.

Dwayne Johnson has said that he intentionally shied away from using any trademarks of his WWF character The Rock, in order to give the Scorpion King character a life of its own. The only exception was "The People's Eyebrow," which he does in response to another character's reference to a harem. He said he included the People's Eyebrow to acknowledge the "millions and millions" of Rock fans. However, The Rock's Entry music is included briefly in the score.

Continuity:
When Mathayus escapes from the harem he cuts the gong and rolls it away for cover, he does not have time to return it to his sheath yet when he drops into Cassandra's chamber he immediately draws his sword.

[the barbarian chieftain is holding up a skull]

Barbarian Chieftain:
We have killed Babylonians!
[the barbarians cheer, he holds up another]

Barbarian Chieftain:
We have killed Mesopotamians!
[the barbarians cheer]

Barbarian Chieftain:
But we have never had the pleasure of killing… an Akkadian.

Jesup:
[Tied up]
May the gods have pity on you, for my brother will not.
[Mathayas storms in and kills the Barbarians]

An enjoyable film that got action, comedy and a love story…

What has kept the vicious tyrant as the absolute conqueror of the land
is the fact that he has a visionary sorceress by his side who knows
when he should attack his enemies… Mathayus finds out that she's a sexy
gorgeous woman who looks amazingly beautiful (Surely the audience is
teased ceaselessly by her cleavage-revealing…). So Mathayus forgets his
commission to kill her, and a kind of romance begins to flourish
between the two as he tries to carry out his assignment…

Kelly Hu plays Cassandra, the female sorcerer who had beauty, charisma,
cleverness, and enigma… In the beginning of the film, we're not quite
sure where she stands… But when she first sees Mathayus, she's
interested in the well-mannered warrior who's strong, brave, loyal and
sincere… She realizes that he might me the future king who can save her
from her power-mad jailer…

As the ruthless conqueror, Memnon (Steven Brand) has got all of the
skills needed to attain global domination… He has also got the force
and the will to accomplish it… The combination was pretty scary…

Chuck Russell's "The Scorpion King" is a visual feast, and an
entertaining action film… It has sexy harem girls, poison arrows,
quicksand, an army of red ants, black scorpions, cobras, explosions,
and a lot of fun… So don't miss it!