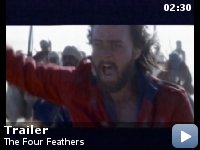 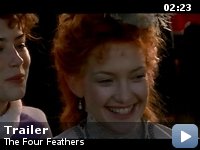 A British officer resigns his post just before battle and subsequently receives four white feathers from his friends and fiancee as symbols of what they believe to be his cowardice.

Storyline
Set in 1884 Sudan, this fifth film to be adapted from the A.E.W. Mason novel follows a British officer who resigns his post right before his regiment ships out to battle the rebels. Perceiving his resignation as cowardice, his friends and fiancée give him four white feathers, the symbol of cowardice, but little do they know he's actually going undercover and plans to redeem his honor.

Taglines:
Freedom. Country. Honor. Passion. To save his best friend, one man must risk everything he loves.

The major fight scene is the Battle of Abu Klea, which took place on January 17, 1885. A British Desert Column of approximately 1,100 troops fought a Mahdist force of over 12,000 dervishes. The scene depicted in the film, however, is a fictional version of the actual battle.

Continuity:
When Jack is chasing the sniper, the sniper is shown running through an alley way with two adults and a child in front of him. After climbing onto the roof, jumping off, and climbing a couple of walls…he is shown again in the same scene running through the alley with the same three people there.

Title Card:
By 1884 over a quarter of the earth's surface had been conquered by the British Army. There was no greater honor for a young man than to fight for Queen and Country. Those that refused the call to arms brought shame and humiliation on their friends and families…

Title Card:
The Symbol of their disgrace was the white feather of cowardice…

As an entertaining adventure film, "The Four Feathers" stands firm…


The story is set in 1884 during the British Empire uprising…

Harry Faversham (Heath Ledger) is a young army officer from a
distinguished military family who never wanted to join the army… He did
it for his father… He resigns his commission on the eve of his
regiment's departure for Sudan… Harry has already disgusted his strict
father, a respected General in the Queen's Army, by declaring no
interest in a soldier's life and now that he is about to be married to
his beloved Ethne (Kate Hudson), he wants to settle down…

When his closest friends and fellow officers find out that he disgraced
the regiment, they send him a box of feathers of cowardice… When Ethne
sends him another feather, he then disappears to redeem himself, to
face up to his fears, to discover himself, to win back his
self-respect…

Shekhar Kapur's "The Four Feathers" is beautifully filmed and
performed… The themes of love, honor, loyalty, friendship, trust,
redemption, wisdom, true strength, and true courage are all there… They
made the characters entirely plausible… But what truly lingers in the
memory about it are the stunning sequences filmed in the Sudan and the
splendid staging of several battles, showing the then standard British
tactics employed in holding off attackers—the forming of squares, with
riflemen deployed in standing, kneeling, firing, holding line, and
keeping eye on the target… These exciting scenes of combat and carnage
are truly impressive…